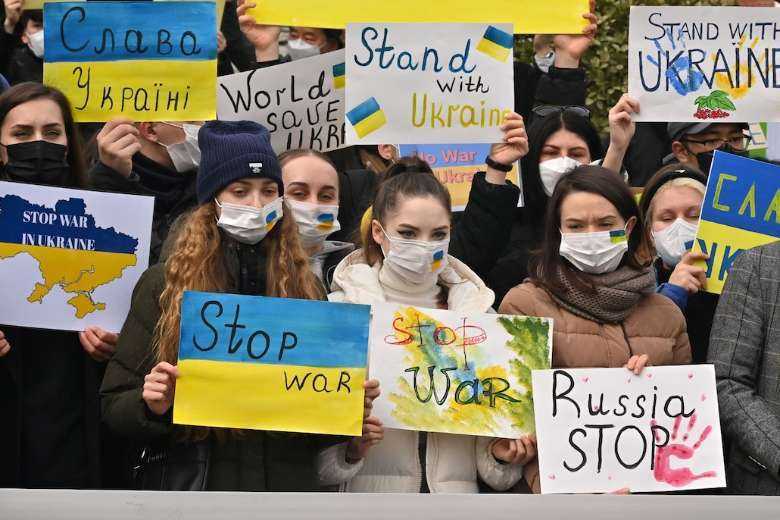 Ukrainians living in South Korea and supporters hold placards during a protest against Russia's invasion of Ukraine near the Russian embassy in Seoul on Feb. 28. (Photo: Jung Yeon-je/AFP)

Myanmar has backed Russia’s invasion of Ukraine as “justified” in sharp contrast to the remaining nine members of ASEAN who have urged peaceful dialogue in a bid to de-escalate the war and find a resolution in accordance with international law.

Russia is a major ally of Myanmar and has conducted arms deals with Naypyidaw since last year’s coup ousted the elected civilian government of Nobel laureate Aung San Suu Kyi, which resulted in ASEAN banning the junta from its annual summits.

Junta spokesman Zaw Min Tun said in a statement that the Russian military had “carried out what is justified for the sustainability of their country's sovereignty ... Russia shows its position to the world as a world power.” The statement was also released in Russian.

Russian military forces have met with stiff resistance since Moscow launched its invasion on Feb. 24, prompting a fierce international reaction, unprecedented sanctions and a rush of arms from Western countries to Ukraine

Pope Francis has also phoned the head of the Ukrainian Catholic Church, Archbishop Sviatoslav Shevchuk of Kyiv-Halych, offering his encouragement and promising “I will do everything I can” to help.

He also broke usual diplomatic practice by visiting the Russian embassy to the Holy See to express his concern over the war.

In my personal opinion, the Russian forces may not be able to overthrow Ukraine through the use of military means and it is the same for Ukraine

ASEAN, meanwhile, has called on all parties to exercise maximum restraint and make utmost efforts to pursue dialogue through all channels, including diplomatic means to contain the situation.

“We believe that there is still room for a peaceful dialogue to prevent the situation from getting out of control,” the regional bloc said in a statement.

“For peace, security and harmonious co-existence to prevail, it is the responsibility of all parties to uphold the principles of mutual respect for the sovereignty, territorial integrity and equal rights of all nations.”

That was followed by a stern warning from Cambodian Prime Minister Hun Sen, the current chair of ASEAN, who warned Russian President Vladimir Putin that he might not succeed in ousting his Ukrainian counterpart Volodymyr Zelenskyy.

“In my personal opinion, the Russian forces may not be able to overthrow Ukraine through the use of military means and it is the same for Ukraine,” he said in a statement.

“This may not be possible even if Russia occupies the whole of Ukraine’s territory and murders or arrests Ukraine’s president. Will the Ukrainians remain silent? Look at some countries like Iraq, Syria, Libya. Has war in those countries ended? The only possible solution is peaceful negotiations.”

Indonesia and Singapore have also condemned the invasion while ASEAN members Brunei, Laos, Malaysia, the Philippines, Thailand and Vietnam — another close military partner of Russia — have been criticized for ambivalence.

ELIAS BISPO
We have always heard of conditions analogous to slavery, but this article caught my attention for the "hereditary" character inherent in a debt, something I had never heard of, which affects about 1 million people in Pakistan. The Ultimatum Online brings excellent article by Lisander Dias on slavery, ( https://www.ultimato.com.br/conteudo/familia-de-cristaos-paquistaneses-e-liberta-da-escravidao ), access on: 28Feb2022, at 18:00h In our country, although slavery has been abolished since the Aurea Law of 1888, we know that it occurs as long as there is a degrading condition of work, it is forced, in exhaustive days and in servitude, it is understood that such a condition occurs. From time to time, there is media reports that authorities have blown up captivity. I was also sorry that although this condition was abolished 30 years ago, it still exists in Pakistan. Because of this article, in a quick web search on the usp magazine website ( https://jornal.usp.br/atualidades/trabalho-analogo-a-escravidao-ainda-persiste-no-mundo/ ), accessed on 28Feb2022, at 16:33h), I found the report that data from the International Labor Organization show that slavery is still a reality worldwide, even after the entry into force, in 2016, of the protocol to combat forced labor. The territory with the highest number of cases is Asia, first, followed by Africa, Latin America and other regions. Victims fail to receive at least $21 billion each year in unpaid wages. In the UN's view, to put an end to this problem, coordinated action by all countries is needed to adopt efficient measures that diminish the benefits of those who use this form of exploitation. So I reflected on why governments don't take more drastic measures since it involves 40 million people? Why in Europe are there young sex slaves from Eastern Europe or third world countries? What world is this, where some are born to suffer while others laugh, in the saying of Tim Maia's song? I remembered some facts: (a) from the condition of man narrated by Paul that we are slaves to sin (Rom 3:23), but that we are delivered from him, we become slaves of God, with a view to sanctification and, finally, eternal life (Rom 3:22); (b) that we were chosen before the foundation of the world to be saints before him (Eph 1:4), created for good works (Eph 2:8-10); (c) that we are of God in Christ (1 Cor. 1:30). I praise the Lord for men like Pastor Shahzad, who are imbued with the purpose of evangelizing and bringing deliverance to the oppressed, deliverance in this and for all eternity, for all who invoke the name of the Lord will be saved (Rom 10:13). The Union of Catholic Asian News website details the subject with ownership, which is why I suggest reading. ( https://www.ucanews.com/news/the-brick-kiln-slaves-of-pakistan/92287# ) As Christians, how can we help?
Reply