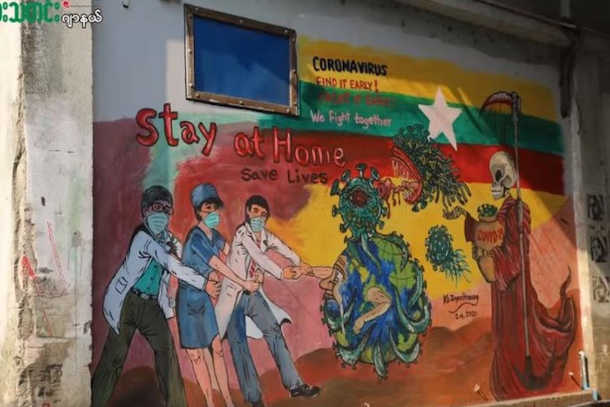 A screenshot of the mural that led to the arrest of three artists in Myitkyina, the capital of Myanmar's Kachin state.

Three artists from conflict-torn Kachin state in northern Myanmar have been charged with insulting Buddhism over a mural to raise awareness of Covid-19.

They were arrested after Buddhist hardliners complained that the mural, portraying a Grim Reaper figure spreading the coronavirus, looked like a Buddhist monk.

On April 3, the deputy director of Kachin’s Religious Office formally filed a charge under article 295A of the penal code, which criminalizes speech that insults religion and is punishable by up to two years in prison.

The mural was painted on a wall in Myitkyina, the capital of Kachin state, and the artists posted a photo of their mural on social media. But they painted over the mural after they were bombarded with online hate speech.

One of the artists, Zayar Hnaung, said he is a Buddhist and had no intention of insulting Buddhism.

“The mural was meant to raise awareness among the public about the coronavirus outbreak. I do apologize to the monks and the people over misinterpretation of the mural,” Zayar wrote on his Facebook on April 3.

Myanmar, an impoverished nation with a precarious health system, has so far reported only 22 Covid-19 cases and three deaths.

Fighting has plagued the mountainous Kachin region since Myanmar gained its independence from Britain in 1948. Most of Kachin’s 1.7 million ethnic Kachins are Christians, including 116,000 Catholics.

Since 2011, more than 100,000 people have been forced into 167 camps for displaced persons in parts of Kachin and Shan states that are variously controlled by government and non-government forces.

“Priority now is to provide life-saving assistance to people affected by conflict in other parts of southern Chin state, including those in and around Paletwa town. We continue to appeal to all parties to grant WFP and our partners access so that we can reach those who need our support,” said Stephen Anderson, WFP’s country director in Myanmar.

Funded entirely by voluntary contributions, WFP is also delivering emergency food to 270,000 people in Rakhine state, 47,000 in Kachin state and 15,000 in Shan state.