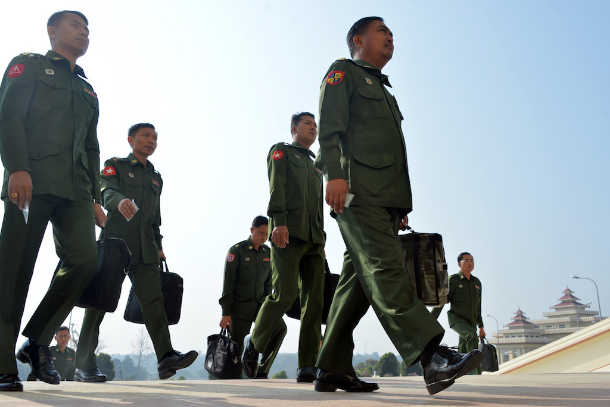 Military MPS arrive to attend a parliamentary session in Naypyidaw on Feb. 19. The parliament decided to set up a committee to discuss reforming the country's military-drafted constitution, pitting Aung San Suu Kyi's civilian government openly against the powerful armed forces for the first time over the incendiary issue. (Photo by Thet Aung/AFP)

Myanmar’s union parliament has approved the formation of a 45-member committee to draft a bill to amend the country’s military-drafted constitution.

Despite objections from military lawmakers and the main opposition Union Solidarity and Development Party (USDP), the parliament approved the plan by a vote of 389-192 on Feb. 19.

Tun Tun Hein, chairman of the new committee, told the parliament that the aim of the all-inclusive panel will be to write a bill to change the 2008 constitution.

Military MPs and the USDP have yet to send their nominees to the committee.

Military MPs claim the move is not in line with parliamentary procedure and protested by standing in silence in a parliamentary session on Jan. 29.

The previous ruling military regime drafted the 2008 constitution, which reserves 25 percent of seats in the parliament for the military and gives them control of the key portfolios of home affairs, defense and border security.

Military MPs also have the power to veto any proposed charter changes, especially provisions that would curb their political power.

Military chief Min Aung Hlaing has said in a rare interview with foreign media that the military accepted that the constitution needed amendments. “But the important thing is that no amendment should harm its essence,” he told Japanese newspaper Asahi Shimbun.

The NLD’s move to amend the constitution came just days after a court in Yangon handed death sentences to two men for the murder of a prominent Muslim lawyer and adviser to Myanmar’s de facto leader Aung San Suu Kyi.

Ko Ni, 63, was shot dead at Yangon International Airport just over two years ago. Gunman Kyi Lin and a former military officer accused of hiring him, Aung Win Zaw, were convicted of his killing.

Ko Ni was an expert in constitutional law and spoke against the 2008 constitution, which allowed the military to retain significant influence despite handing over power to Suu Kyi's civilian administration in April 2016.

Suu Kyi, who has been barred from becoming president because she was married to a foreigner, has led the country via the specially created role of state counselor after being helped by the Muslim lawyer.