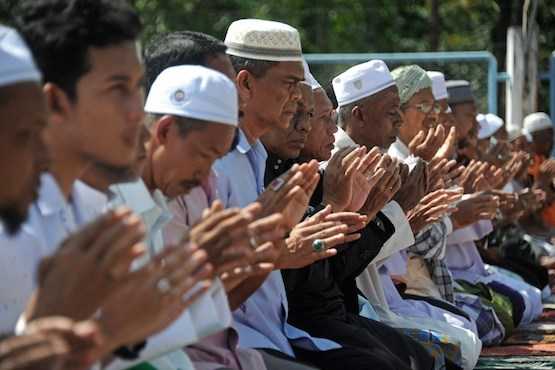 Thai Muslim men offer prayers in Cho Ai Rong district in Thailand's restive southern province of Narathiwat on March 15, 2016. In the northern Thai city of Nan, local Muslims have been denied a permit to build a mosque, another example they say of growing Islamophobia in the South East Asian nation. (Photo by Madaree Tohlala/AFP)

In 2015 Muslims in Thailand's northern province of Nan were about to get a permit from the government to build a mosque that they planned to expand into a community learning center for local residents to learn about Islam.

But out of nowhere, on March 1, that same year, a protest was organized in the heart of the sleepy provincial capital also called Nan. More than 800 people turned up, many of them holding signs saying, "Nan people do not want a mosque."

Led by a Buddhist monk and community leaders, the group marched to the provincial hall to hand over a letter protesting the planned construction of the province's very first mosque.

Thai newspapers quoted demonstrators accusing the Muslims of not properly consulting them about the plan while other local Buddhists were quoted as saying they were afraid of a "hidden political or religious purpose" that could lead to could lead to unrest and violence.

Anti-Islamic sentiment in Thailand draws from a wide range of narratives that include the global jihad and bombings in the country's Muslim-majority southernmost provinces where a 12-year insurgency has claimed about 6,800 lives.

Muslims in Nan described their relationship with the local Buddhists as cordial but all that changed when their community captured national attention after the March 2015 demonstration.

"My business took a nose dive and people who used to associate with me kept their distance," said one Muslim man who asked that his name and business not be identified.

Today, two years after the demonstration, the situation is still tense. Requests for interviews with leaders from both communities were granted on condition of anonymity. For the Muslims, the meeting had to be conducted outside Nan province.

Muslims from Nan said they were victims of national politics. They said that the March 1, 2015 demonstration was organized by the so-called Yellow Shirts, a political movement dedicated to ridding Thailand of any influence from fugitive former leader, Thaksin Shinawatra who was ousted in a coup in 2006.

The protest was meant to discredit some rival Red Shirt leaders who had supported the mosque, according to local Muslims, some of whom felt that both the Reds and Yellows were more concerned with their political agenda than the feelings and needs of Muslim residents.

One Muslim vendor from Nan said, "People were scared to associate themselves with me and other Muslims for fear that they would get caught up between the two rival political groups."

As expected, local government officials distanced themselves from the rivalries but quietly promised Muslims that in due time they would get their mosque.

But it has been years since the demonstration and the permit has yet to be granted.

Similarly, Muslims in nearby Chiang Mai province also found themselves in similar situation for something that was beyond their control. A group of Buddhist investors wanted to build a Halal food industry complex, but their competitor, also Buddhists, wanted to turn the same plot of land into a landfill site. Halal refers to food products that prepared in accordance with Islamic dietary law.

When the Chiang Mai provincial committee supported the Halal complex, the opposition played the Islamophobia card, trying to whip up local sentiment by talking about the possible Islamization of Chiang Mai, one of Thailand's most visited cities and popular among local and foreign tourists.

Muslims in Chiang Mai said that they do not have the kind of financial resources to invest in such a project and the best they were going to get was manual labor jobs such as slaughtering and meat packing.

The use of Islamophobia for political reasons has become a point of concern for Thai security officials who are afraid that growing anti-Islam sentiment would take the country down the same path as neighboring Myanmar, where a monk-led anti-Islam campaign attracted all sorts of condemnation from the international community.

Muslims in Thailand said that they were aware of growing anti-Islam sentiment in the country and around the world. For the past year or so, members of civil society organizations have been quietly coming together to formulate a strategy to address the problem.

Some suggested education at the primary level to counter radical ideas embraced by extremists. Others thought that such an approach would take too long and called for more immediate action, such as adopting a counter or alternative narrative that embraced the universal message of human rights and humanitarian principles.

Some thought that such an approach sounded too secular and urged thinkers in their community to look for ways to understand the Quran in a way that allows one to live in the modern world.

To do this is to confront the troublesome narrative head on. But face-to-face discussions among various Muslim sects and jurisprudence are unheard of in Thailand.

A few weeks ago, a well-known activist from the conservative side called on the clerics and the insurgents to take a stand against the activities of two local Buddhist lesbians who had been working with local Muslim women on gender equality.

The progressive camp refused to budge and embraced the two lesbians with moral support and words of encouragement. And, while various schools of thought compete among themselves to claim the right to interpret Islam, all are pretty much agreed that they must somehow come together to tackle ongoing Islamophobia. How and when, that remains to be seen.

Don Pathan is a Thailand-based consultant and security analyst.