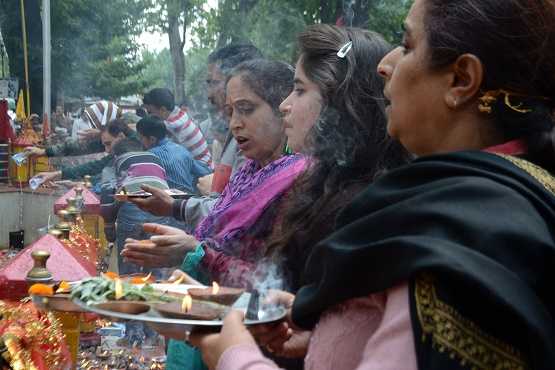 Kashmiri Pandits pray in the Indian state of Jammu and Kashmir. Separatist violence forced thousands of them to migrate but now the government has announced plans to bring them back. (Photo by Umer Asif)

Muslim and Catholic leaders are opposing a plan to return thousands of Hindus to separate enclaves in Jammu and Kashmir, India's only Muslim-majority state, after Hindus there fled secessionist violence some 30 years ago.

The state's legislative assembly recently passed a unanimous resolution to return Hindus who migrated from the state. Muslim leaders said they would oppose the plan.

However, a priest from Jammu-Srinagar Diocese, which covers the entire state, has welcomed the government decision but opposed the idea of having separate settlements because it would have a "disastrous impact."

"A heterogeneous society is important for a person's development. Kashmiri Pandits are welcome as Jammu and Kashmir belongs to them as much as it belongs to the majority Muslim population. If the Kashmiri Pandits return, it will be like the state going back to its glorious past when people of all religions used to live in harmony and peace," Father Roy Mathew, who works in the state capital Srinagar, told ucanews.com.

Thousands of upper-caste Hindus, known as Kashmiri Pandits, migrated from the state to other parts of India after an Islamic insurgency broke out in 1989. The persistent demand for freedom from Indian rule killed some 200 Kashmiri Pandits in 1989-90. As tensions simmered, Hindus living in the majority-Muslim state say they were targeted by Islamic groups.

Some 60,000 Kashmiri Pandits families migrated, according to official records, with at least 20,000 moving to Delhi.

The state government has identified a total of 40.5 hectares in eight locations in the Jammu and Kashmir for use by the Kashmiri Pandits, according to a report in The Times of India.

"We won't allow such colonies," said separatist leader Syed Ali Geelani who spearheaded the 2016 unrest in the state in which 90 people were killed.

"We have always urged them [Kashmiri Pandits] to return and we will welcome them if they are willing to settle within us and in our society," Geelani said. However, the separatists will resent the decision to settle the Kashmiri Pandits in separate townships in Kashmir.

"It will be opposed by one and all," he said.

Government spokesman, Naeem Akhtar said Jammu and Kashmir at present has an "ethnic imbalance" and the return of Hindus was essential.

The move is inherently political. The Hindu-nationalist Bharatiya Janata Party (BJP) promised to resettle Kashmiri Pandits in Kashmir as part of its successful election campaign in 2014. The BJP campaigned on the issue with Kashmir’s Hindu community during the polls, and it took three of six seats up for grabs in Jammu and Kashmir on the back of this support.

But the plan is divisive: some critics say large-scale resettlements may only exacerbate still-existing tensions.