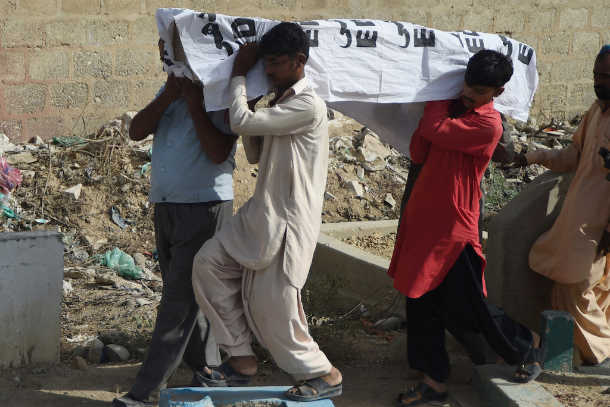 Pakistani relatives carry the coffin of a 6-year-old girl at her funeral in Karachi in April 2018 after she was raped and murdered. Activists say that many Christian and Hindu girls suffer sexual abuse in Pakistan. (Photo by Asif Hassan/AFP)

A poor Christian family in Pakistan are demanding justice after their teenage daughter was allegedly raped by five Muslims.

Maria, 15, was kidnapped from her house in Sheikhupura city of Punjab province on June 9 while her father Jalal Masih was out working as a laborer.

“The locals saw them abducting her at gunpoint in a vehicle. I reached his [Sajid’s] office but he was absent. We made contact the next day and he threatened to return her dead body if we informed the police,” Masih said in the FIR filed six days after the incident.

“Sajid escaped after leaving Maria on our doorstep on June 10 night. She was extremely scared.”

Christian activists are demanding the arrest of the culprits as the news spreads on social media.

“The number of unreported cases will be higher as the families of victims usually avoid getting help from biased police officials who support cruel and influential culprits. Only Christian and Hindu girls are victims in such cases. Crimes against religious minorities are increasing at a high scale in Pakistan,” LEAD national director Sardar Mushtaq Gill told ucanews.com.

Interfaith group Rwadari Tehreek launched an anti-rape campaign with a protest on June 15 in front of the Punjab Assembly in Lahore.

“It is a sad reality that dozens of male and female children are subjected to sexual abuse and violence almost every day,” said chairman Samson Salamat.

“Unfortunately, governments and concerned authorities have turned a blind eye toward these serious violations of human rights and the victims are being denied justice because of the lacunas in the justice system.”

Salamat called on authorities to organize awareness sessions to sensitize police officials on this important issue.

“Most cases are dealt with in a wrong manner because of the bad treatment and attitude in police stations. The victims only become more victimized. Safe and fully equipped rehabilitation centers should be established for the victims of rape and child sexual abuse,” he said.