Smoke rises over the city of Marawi in the southern Philippines after an aerial bombardment by government troops on suspected terrorist positions on June 16. (Photo by Joe Torres)

Religious and political leaders in Marawi in the southern Philippines warned of "bloody retaliations" against terrorist gunmen who have occupied the city since May 23.

Some 300,000 people have been displaced as fighting between security forces and gunmen claiming to have links with the so-called Islamic State group marked its first month.

"Believe me, there will be a retaliation from the people," said Sultan Camid Gandamra Sr., administrator of Marawi city.

He said the "bigger problem" will come when the shooting is over when people start to go back home and find the city razed to the ground.

"There will be a retaliation, a mass retaliation against those behind the attack. It will be bloody, believe me," Gandamra told ucanews.com.

Tribal leaders in Marawi have called on the government to form an armed militia to protect residents from future attacks.

"[The group] should be trained by the military like the ones organized during the martial law years in the 1970s," said Sultan Porcawa Dia of the Royal Sultanate of Lanao.

"As far as Marawi is concerned, [the civilian armed group] will ensure security and peace and order," said Dia, adding that the situation in Marawi "cannot be resolved by the government alone."

Philippine President Rodrigo Duterte has declared martial law across the island of Mindanao following the attack by the terrorist gunmen. 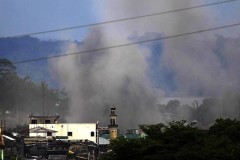 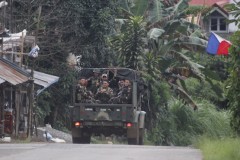 Bodies still to be retrieved from Philippine conflict zone

Human rights groups and civil society organizations questioned the validity of the declaration that covers the whole southern Philippines.

The National Union of People's Lawyers said the declaration is "a dangerous precedent" that can be used as "an excuse for the possible declaration of martial law in the entire country."

The group said the power of the president to call out the armed forces is "sufficient" to quell the conflict in Marawi.

The military claimed that at least 242 terrorist gunmen have been killed since the armed conflict broke out a month ago.

"The number goes to show that we are determined in pursuing our relentless operations," said military spokesman Col. Edgard Arevalo.

The clashes have also resulted in the deaths of 56 soldiers, three policemen, and 26 civilians, according to the military. At least 200 soldiers were also reported wounded.