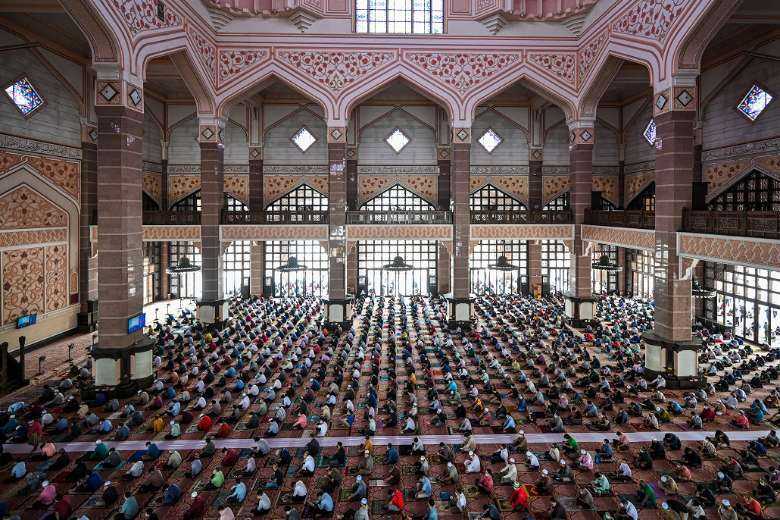 Muslims practice social distancing as a preventive measure to combat the spread of the coronavirus on the first Friday of the holy month of Ramadan at the Putra Mosque in Putrajaya on April 16. (Photo: AFP)

Several prominent faith leaders in Malaysia have called for religious harmony and national unity in recent days in the Muslim-majority country where hardline Islamists are increasingly intolerant of religious minorities, especially Christians.

In a welcome move, Zulkifli Mohamad Al-Bakri, minister in the Prime Minister’s Department (Religious Affairs), has urged all Malaysians to work toward creating a more pluralistic society.

“In Malaysia, Islam is enshrined as the religion of the federation, but freedom of religion has been practiced for a long time,” the minister told Bernama, the country’s national news agency.

“This right is enshrined in the federal constitution, not just for Islam but also for other religions as long as it does not disturb the peace, cause inconvenience or lead to harm towards any party.”

The religious affairs minister’s views have been echoed by Shah Kirit Kakulal Govindji, president of the Global Unity Network, an Islamic organization that promotes “unity through knowledge.”

“The mentality and action of looking down on or insulting other religions should not exist in Malaysia,” the faith leader stressed. “We need to respect and abide by the right to freedom of religion guaranteed in this country.”

Converts from Islam to Christianity experience the most persecution, as every ethnic Malay is expected to be Muslim

Christians account for around 10 percent of Malaysia’s 32 million citizens and are routinely denigrated by hardline Islamists, although outright violence against them is rare.

However, despite the relative religious freedoms they enjoy, Christians in Malaysia also face routine discrimination and several restrictions.

“In Malaysia, the government and religious groups monitor churches and it is illegal to share the gospel with Malay Muslims,” explains Open Doors International, a non-denominational mission supporting persecuted Christians worldwide.

“Converts from Islam to Christianity experience the most persecution, as every ethnic Malay is expected to be Muslim. These believers are often forced to hide their faith and meet in secret. If discovered, they could face divorce from their spouse, rejection from their family — or even risk being sent to a re-education camp.”

Since the country’s High Court last month overturned a long ban on Christians to use the Islamic word “Allah” for God in their own religious terminology, several prominent Muslim politician and religious leaders have vented angrily against local Christians, accusing them of appropriating Islamic practices.

In recent years several prominent Muslim politicians have also accused Christians of preying on poor and uneducated people in their outreach in underprivileged communities.

For their part, the country’s Catholic leaders have consistently called for religious tolerance and demanded that the right of Christians to practice their faith in peace be upheld, according to the constitution, which guarantees religious freedoms.

In commenting last week on the High Court’s recent ruling that Malaysian Christians can use the word “Allah” in their religious terminology, Julian Leow Beng Kim, archbishop of Kuala Lumpur, called on Catholics to exercise restraint and demonstrate respect toward their Muslim fellow citizens.

“Though the ruling [has been] in our favour, we cannot gloat in triumph or do a victory dance because the use of the word ‘Allah’ by non-Muslims still remains a contentious issue in our country,” the archbishop wrote in an op-ed published on April 17.

“We must endeavour to find a common ground of mutual respect and understanding with our Muslim brethren. We will continue our struggle for justice and peace in our land, for mutual harmony and upbuilding of the aspirations for our nation.”