Group claims use of the word is criminal blasphemy 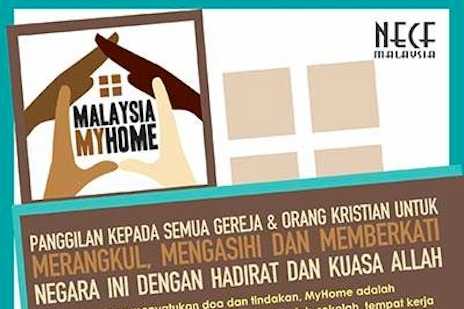 An evangelical church group’s Facebook message calling Christians to pray for “Allah’s blessings” on the country has riled up a group of Muslim lawyers who are demanding state Islamic bodies act against what they have branded a “criminal” offence against their creed.

The Muslim Lawyers Society of Malaysia (PPPMM) today accused the National Evangelical Christian Fellowship of Malaysia (NECF) of committing “criminal” blasphemy against Islam by misappropriating the name of the Islamic god for their purposes, even as the dispute is being heard in the Court of Appeal.

“It is an offence for any party to deliberately and continuously use Allah and a few other words with roots from Islam in the context of a non-Islamic religious for any purpose.

“The NECF poster that has clearly misused the sacred name of Allah is obviously a criminal action and breaches the Schedule of (Section 9) Part I of the Enactment that forbids the use of the name of Allah as well as other Islamic terms by non-Muslims,” PPPMM president Datuk Zainul Rijal Abu Bakar said in a statement.

While the Federal Constitution upholds the right to freedom of religion, nearly all of the 13 states have enacted legislation that allows for control and restriction of the propagation of non-Islamic religions.

The law cited by Zainul refers to a list of words, which the respective state Islamic authorities deem strictly forbidden to be associated with a non-Muslim religion.

For example, Terengganu, which was the first state to enact the state law in 1986, forbids non-Muslims from spreading their religion using 22 words such as Allah, ulama, injil, fatwa, mufti, dakwah, rasul and even mubaligh.

Claiming to have received numerous complaints from various non-governmental Islamic organisations, Zainul urged the respective state Islamic departments and councils to file police reports to pressure the government to act against the church.

In its Facebook page, the umbrella body representing the country’s evangelical churches urged, in the national language, all churches and Christians to “embrace, love and bless the country with Allah’s presence and power”.

The same message was also carried in English and Chinese.

Under a project it called “Malaysia My Home”, the NECF urged believers in the faith to put prayer and action together for God’s blessing to institute “real and lasting change for our communities”.

The message also called on Christians to “get to know the people around you” and to “extend help to those in need”.

The message was posted on May 9 — four days after Malaysia’s hotly contested 13th general election and in which the results have fractured society.

A High Court had in 2009 ruled that the Catholic Church had the right to publish the word “Allah” in the Bahasa Malaysia section of its newspaper, Herald, as the Arabic word was not exclusive to Islam, contrary to the belief of many Muslim Malaysians.

Issues concerning religion and race in this country of 28 million, where 60 per cent are constitutionally defined as Malay and Muslim, touch a nerve and have sparked violence in the past, leading to attacks on several places of worship nationwide in 2010 following the landmark judgment.

The Home Ministry is appealing High Court judgment and the Court of Appeal is currently hearing an appeal by several state Islamic councils to intervene in the case as well.

Hearing for intervention is set to resume on May 23.