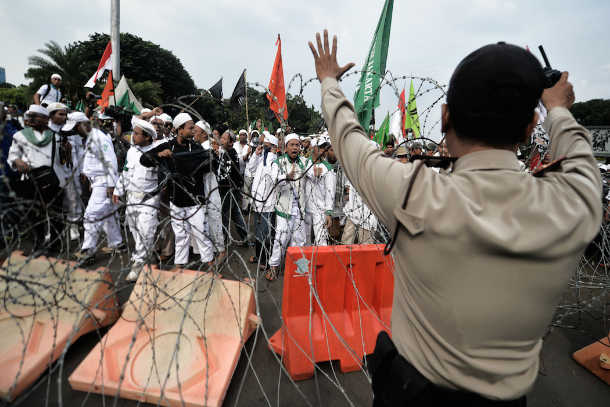 Hundreds of Islamic Defenders Front members take part in a rally in front of the presidential palace in Jakarta in this file photo. The hard-line group has been accused of threatening members of the Family of God Church — a Protestant group — for setting up a church in West Jakarta, in Indonesia. (Photo by Bay Ismoyo/AFP)

Hard-line Muslims in Jakarta are protesting and issuing threats against the presence of a Protestant church in their neighborhood, even though it has a required government permit.

They claim the church is situated in a Muslim-dominated residential area in the Cengkareng district of West Jakarta and is too close to a mosque and an Islamic boarding school.

The church administrators disputed the claims, saying there were no mosques or residential areas nearby.

Nevertheless, banners have been placed outside the church calling for it to be shut down.

Anwar, 43, a Muslim resident in the area said the very presence of the church has angered locals.

“We have asked the West Jakarta major to revoke its permit,” he said.

He said the Christians have not held any services there yet.

“I heard from local clerics that the main objection is because a mosque will be built nearby,” said Anwar when asked why there was not a mosque in the vicinity as claimed.

Reverend Timotheus Halim, head of the Family of God Church, said he does not understand why objections were being raised as all legal requirements had been followed.

"Our church got a permit from West Jakarta mayor on July 2 this year, based on an agreement with local people," Rev. Halim told ucanews.com.

However, on July 5 he was summoned by community leaders who told him the church was banned because it was near a mosque, an Islamic boarding school, and houses owned by clerics.

He said he and 150 members of his congregation planned to hold their first prayer meeting at the new church on July 7.

However, it was canceled after they received threats from Muslim groups including the notorious Islamic Defenders Front.

He said the same group had hounded them out of their last church building in West Jakarta.

“We have moved here, and have met similar opposition," Rev. Halim said.

“I will fight and not give up because we have a legal permit and have fulfilled all requirements from the government,” he said.

Reverend Gomar Gultom, general secretary of the Communion of Churches in Indonesia said the case will provide a test of the government’s commitment to upholding the law.

"How ready is the government to go up against certain groups that try to impose their own will on others," he said.

The government, like the church, must not surrender to pressure from such groups, he added.