This could be the first time a fruit or vegetable has been accused of having inappropriate religious associations. 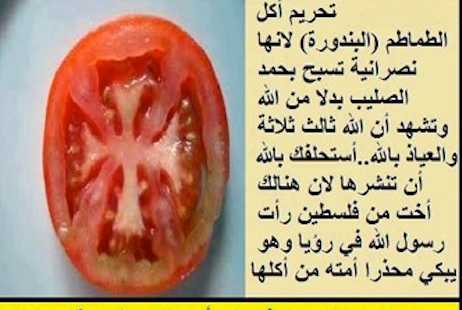 A Salafist group called the Popular Egyptian Islamic Association has come under fire after sending out a warning on Facebook urging its followers not to eat tomatoes because the vegetable (or fruit) is a Christian food. The group posted a photo on its page of a tomato - which appears to reveal the shape of a cross after being cut in half – along with the message: “Eating tomatoes is forbidden because they are Christian. [The tomato] praises the cross instead of Allah and says that Allah is three (a reference to the Trinity). ??[God help us]. I implore you to spread this photo because there is a sister from Palestine who saw the prophet of Allah [Mohammad] in a vision and he was crying, warning his nation against eating them [tomatoes]. If you don’t spread this [message], know that it is the devil who stopped you.” Yeah... no. Predictably, Facebook users expressed outrage over the post, which prompted the group to clarify its stance on the controversy with the update, “We didn’t say you can’t eat tomatoes. We said don’t cut it in [such a way that reveals] the cross shape.” Full Story: Salafist group warns tomatoes are “Christian”Source:nowlebanon.com