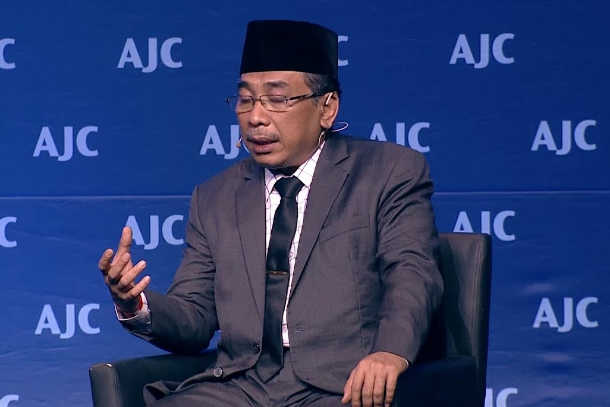 Yahya Staquf's humanitarian Islam rejects the Salafist view favored by Sunni radicals that insists that there is only one formal expression of Islam. (Photo from YouTube)

Do European politicians dare to tell Muslims what they should do? According to one of Indonesia’s leading Muslim figures, K.H. Yahya Staquf, general secretary of Sunni movement Nahdlatul Ulama (NU), it’s important that they do so for the sake of their own communities.

Staquf has been in Europe lobbying for more discussion on his call for Muslim societies to discard passages of the Quran and the hadiths — the sayings of the Prophet Muhammad — that condone violence toward others.

The Muslim cleric has been arguing that European political parties, including those on the right, should stay united and actively address populist concerns about threats linked to Islam, terrorism and migration. Under this scenario, leaders like Hungary’s Viktor Orban should not only be trying to insulate their countries from Muslim migrants but also engaging in dialogue with Muslim communities.

But while Staquf certainly deserves praise for continuing to campaign internationally and at home for a more liberal interpretation of Islam, it will be difficult for European political parties to take up the issue. In doing so, they would be making themselves targets for radicals and for barbs from populists such as Orban who reject Muslim migration to Europe.

Staquf’s campaign previously took him to Washington, D.C., in support of what he and his allies in NU call humanitarian Islam. It argues that Islam has many faces, just as it has prospered among different cultures. It rejects the Salafist view favored by Sunni radicals that insists that there is only one formal expression of Islam.

The Islam favored by the Salafists finds its ultimate expression in the hate-filled diatribes and abuses committed by Islamic State. Followers believe they have the right to kill infidels and even fellow Muslims who don’t agree with their extreme position. Staquf is calling for a reinterpretation of Muslim jurisprudence — fiqh — to reject articles in the Quran and the hadiths that support this violent ideology.

In doing so, he is probably high on the hit list of hard-line Islamists in many corners of the globe. While Christianity’s holy texts — particularly the Old Testament — contain vengeful passages, modern Christians have largely put them aside. In Islam, the followers of Islamic State have resurrected passages in their holy books that encourage the murder of apostates, including beheading, and stern action against anyone, Muslim or not, who doesn’t follow Shariah law.

According to a press release from NU, Staquf’s visit to the European Parliament on Jan. 31 and Feb. 1 in his capacity as a member of Indonesia’s Presidential Advisory Council was designed to encourage EU politicians “to halt the rapidly accelerating polarization of European societies by acknowledging and addressing legitimate concerns raised by populist forces about the nexus of national and international security threats linked to Islam, terrorism and migration.”

He urged his audiences to take part in “frank discourse” about “problematic tenets of Islamic orthodoxy” and to encourage Muslim religious authorities and Middle East governments to “boldly acknowledge and reform them.”

Up until now, most Western governments have been keen to stay out of the argument, believing that interference in debate over Muslim jurisprudence would do more damage than it was worth. The Barack Obama administration steadfastly refused to recognize the violent passages in Muslim texts as the core problem behind al-Qaeda or Islamic State. The Donald Trump administration has not addressed the issue.

The press release noted that Staquf directly addressed this reluctance to get involved in talks with the center-right European People’s Party (EPP) think tank — the Wilfried Martens Centre for European Studies.

He critiqued Western governments’ tendency to ignore and even deny the obvious theological roots of violent and non-violent Islamist extremism. Staquf’s remarks “validate discussions that have recently emerged at the heart of the EU itself. These developments reflect the fact that the multibillion-euro P/CVE [Preventing/Countering Violent Extremism] industry has proven ineffective due to flawed root cause analysis, while religious supremacism, separatism and violence continue to spread.”

Holland Taylor, founder of the LibForAll Foundation which is sponsoring Staquf’s lobbying efforts, dismisses fears that European or other politicians would make themselves targets by promoting Staquf’s argument and engaging in debate.

He says it is in Europe’s own self-interest to be proactive on the issue of Islamic jurisprudence. “Throughout Europe, election results are increasingly determined by security issues inextricably linked to Islamist terrorism and migration,” he told ucanews.com.

“Politically effective discourse regarding these issues is the main electoral currency in Europe today. National elections consistently hinge on political maneuvering around these issues, and the 2019 EU parliamentary elections will constitute a de facto referendum on related policy agendas.

“Political trends in Europe appear to favor increased honesty about these issues, and the spiritual wing of the NU is unique in addressing these issues with clarity and frankness. European security services can, by and large, ensure politicians' physical safety but cannot preserve their hold on political power if popular sentiment on these issues continues moving steadily to the right.”

It remains to be seen how successful Staquf’s lobbying will be in encouraging politicians and governments outside the Muslim world to get involved in an issue which most Muslims believe is purely their own domain.

In a speech last year, Staquf said he had been invited to take part in a foreign nation’s deradicalization program. He had declined, he said, because NU’s approach was “not to focus primarily upon the deradicalization of people, one by one. Rather than limit our focus to individual grains of sand upon a beach — questioning why they behave as they do — we seek to shape the tidal forces and other elements responsible for the deposition and alignment of the beach itself. We do that by reinforcing a civilizational worldview that marginalizes and discredits extremist ideology while isolating the radicals themselves.”

In the past, he has admitted privately that he is not optimistic about his task of changing the nature of “the beach” but says he feels he has no choice but to keep trying.