A man accused of inciting violence against Sikhs at a place of worship in Pakistan’s Punjab province has been arrested and charged under anti-terrorism laws.

Imran Chishti led a mob of hundreds of Muslims who allegedly vandalized Nankana Sahib Gurdwara on Dec. 3 and made inflammatory speeches against the tiny minority community.

Videos of Chishti openly threatening Sikhs went viral on social media, drawing flak from activists and political leaders both in Pakistan and India.

“The main culprit in the Nankana Sahib incident, Imran, has been arrested. An FIR [first information report] has been registered at Nankana Police Station under blasphemy and terrorism laws,” Azhar Mashwani, a spokesman for Punjab’s chief minister, tweeted.

The scuffle, he claimed, was between two Muslim groups and had nothing to do with Sikhs.

The accused, who issued a video apology before his arrest, is the brother of Ehsaan, the man who allegedly abducted a Sikh girl and converted her to Islam last year. Following a social media outcry, the girl was moved to a government-run shelter in a bid to allow a court to settle the matter.

“The major difference between the condemnable Nankana incident and the ongoing attacks across India on Muslims and other minorities is this: the former is against my vision and will find zero tolerance and protection from the govt including police and judiciary,” Khan said.

“In contrast, [Indian PM Narendra] Modi's RSS vision supports minorities oppression and targeted attacks against Muslims are part of this agenda. RSS goons conducting public lynchings, Muslims being violated by mobs are all not only supported by Modi govt but Indian police leads anti-Muslim attacks.” 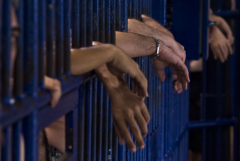 “Attempts to paint this incident [Nankana Sahib] as a communal issue are patently motivated. Most importantly, the gurdwara remains untouched and undamaged. All insinuations to the contrary, particularly the claims of acts of desecration and destruction of the holy place, are not only false but also mischievous,” it said.

“The government of Pakistan remains committed to upholding law and order and providing security and protection to the people, especially minorities. The opening of the Kartarpur Sahib Corridor is a manifestation of Pakistan's special care extended to minorities, in line with the vision of the Quaid-e-Azam Muhammad Ali Jinnah.”

The Kartarpur Corridor is located in Punjab, a region divided between Pakistan and India since the partition of British India in 1947. It was opened on the 550th anniversary of the birth of Sikhism's founder, Guru Nanak, on Nov. 12.