Bishops attending the funeral of Father K. J. Thomas on April 5, 2013 in his native Kerala state. (Photo supplied by the priest's family)

Family members of a seminary rector murdered in southern India nearly three years ago have called on bishops to suspend several priests accused of the crime.

Church inaction and apathy regarding the affair have caused the family great distress, they said.

"The continuance of these accused priests in active ministry gives them an undue advantage of doubt," K.J. Mathew, brother of the murdered priest Father K. Thomas, said in a letter to the Catholic Bishops' Conference of India.

Two priests and a lay person were arrested almost a year after Father Thomas was found murdered on April 1, 2013, inside St. Peter's Pontifical Seminary in Bangalore. These two priests remain in custody.

In November, police charged four more Catholic priests and three other people with conspiracy to murder. 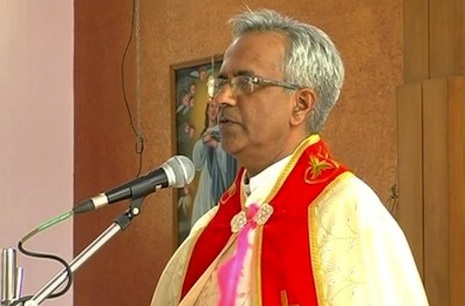 "Despite the court issuing nonbailable arrest warrants, these priests continue in their parish ministries, which shows how casually church officials look upon the crime," Joyson Mathew, the dead priest's nephew, told ucanews.com.

"Further delay in taking action against the accused will alter progress in this case. We request all the accused priests in this case be suspended and to initiate canonical proceedings to laicize [defrock] them," said the Feb. 22 letter, a copy of which was seen by ucanews.com.

It said a request in mid-February by the jailed priests for a reinvestigation by federal authorities was "a tactic to buy time and to delay any action."

The family said it has no reason to doubt the evidence presented by investigators.

"A group of people are trying to subvert justice so openly and we are not able to do anything about it," the letter said.

The police are reluctant to arrest the priests still serving "because of the clout and influence of the church" said Joyson, who lives in the United States with his father, K.J. Mathew.

He said in the U.S. and other Western nations "priests are immediately removed from ministry following allegations of this nature, and investigated. If there is an arrest they are most often suspended, pending an investigation."

He said the murder was part of a three-decade long and ongoing ethnic tussle in the Bangalore Archdiocese and in the seminary, where local Kannada language-speaking Catholics have been fighting for linguistic and administrative superiority.

Joyson accused archdiocesan authorities and Vatican officials responsible for the management of the Pontifical seminary of "contributing to the situation that led to the murder by their delay in taking action against some priests."

The murder and its investigation are "an opportunity for the church to put its house in order. If this opportunity is missed, the church in Bangalore is headed for greater darkness," he said.