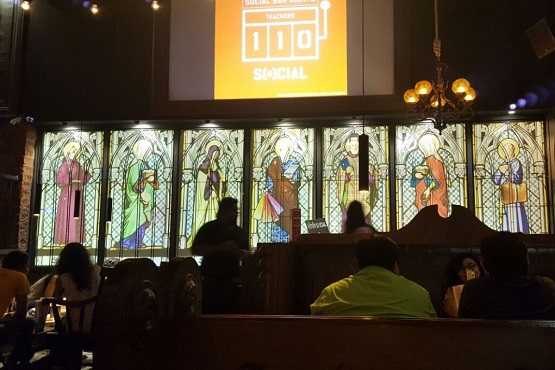 This Mumbai pub is decorated like a church. Catholic leaders have sought legal action against the pub owners for offending their religious sentiments. (Photo supplied)

A trendy pub in Mumbai that thought it could appropriate Christian imagery for its decor was forced to think again when local Catholics accused them of blasphemy and sought legal action.

Catholics in Mumbai filed a police complaint and threatened to sue the owners of the pub after they used images of Christ, the Bible and other sacred objects to decorate their urban watering hole.

"This is blasphemy, done to insult and show contempt for religious and sacred things and this is totally unacceptable," said Godfrey Pimenta of the Watchdog Foundation, the rights group who brought the matter to the police.

The pub’s seating arrangement resembles church pews, there are stained-glass windows with pictures of saints and Biblical quotes emblazoned on the furniture.

A picture of Jesus Christ shows him holding a leather bag while the bar also has a container resembling the Tabernacle with some liquor bottles and an inscription of a holy cross on it.

Bombay Archdiocese, which is based in Mumbai city, threatened legal action if the decor was not changed immediately. In a Nov. 3 statement the archdiocese demanded the pub be closed until the offensive objects are removed.

"We strongly condemn what appears to be a deliberate attempt to insult the Christian community by showing a lack of respect for our religious beliefs and the sacred objects we use for divine worship," the statement said.

Riyaaz Amlani, chief executive of the company that runs the pub, said the decor was meant "as a satirical statement against the growing trend of overt consumerism where people are made to feel inadequate and unhappy unless they buy more and more things."

In a statement, issued as a reply to Bombay Archdiocese, he said his group have "just learned" that the decor is offensive to Catholics. He also offered "a complete and unconditional apology on behalf of our group."

The message of the decor was "that money and things cannot buy you happiness" but they have "already removed all the imagery that the Watchdog Foundation considered offensive," the statement said.

Joseph Dias, a Christian activist from the city-based rights group Catholic Secular Forum, said that "religion is becoming irrelevant to people, especially to young urbanites" who are the target market of such pubs.

"They fear no retaliation from the Christian community, a minority and peace-loving group. They consider Christians a sitting duck," he said, adding that "nobody would dare to do such things against other religions in India."

Dias also rejected the pub owner’s apology. "It cannot be business as usual with just the imagery being removed. The entire interior must be changed so nothing even remotely resembles a church," he said.

"An offense has been committed and the guilty must be punished," he said, adding that his group will organize a mass protest so that such violations against Christians are not repeated.