Demonstrations will not stop until the authorities rectify the problem 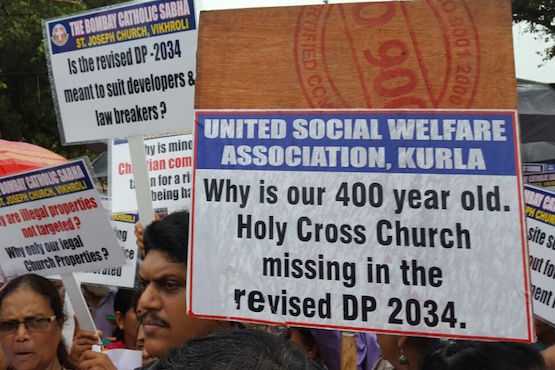 Catholic protesters in Mumbai who were demanding on July 18 that the government properly mark religious landmarks in the city's development plan. (Photo by Laveena Francis)

Thousands of Catholics gathered in India's financial capital Mumbai on July 18 to protest a development plan for the city, which they say will make church property illegal.

With many holding placards, an estimated 5,000 people participated in the peaceful protest in the city against the Revised Plan for Greater Mumbai 2014-2034. The plan will be finalized at the end of this year and is currently under public debate.

Protesters say historical and religious buildings have been either wrongly marked or not marked at all, which means they could be considered illegal and demolished any time, Christian leaders say.

"We are very concerned that most of our churches in the city are not shown correctly," Rita Dsa, vice president of Bombay Catholic Sabha (forum), told ucanews.com.

"For example, Mahim Church, which is more than 400 years old, isn't marked correctly. Hundreds of churches and graveyards are either wrongly listed or excluded," said the forum official.

The protesters also submitted a petition against the revised development plan to the civil authorities.

The city's Christian presence increased since Portuguese colonial times in the 16th century. Mumbai Archdiocese, which covers the city and suburbs, is the most populous in India with over 525,000 Catholics.

Dolphy D'Souza, president of Bombay East Indian Association for Save Our Land, said that they have reasons to think that it "is a deliberate attempt to harass the (Christian) minority community."

The state is run by a coalition government of pro-Hindu parties, led by the ruling Bharatiya Janata Party (BJP). Protesters allege the BJP has designs to make India into a Hindu hegemony.

"We fail to understand how they could miss out such religious landmarks," said D'Souza. "We demand the authorities rectify this."

Furthermore, out over 200 ancient village settlements, only 74 are listed in the plan. The aboriginal areas have also completely vanished, according to D'Souza.

Naseem Khan, a legislator from the Kurla area of the city, was also present at the protest assured  Christians that their grievances would be presented in the legislative assembly.

Anand Castelino, secretary general of Bombay Catholic Sabha, told ucanews.com that they would not stop the protests until the authorities "rectify the problem."

Noting that civil authorities have already removed some allegedly "illegal" heritage crosses, Castelino is worried that "tomorrow they will demolish our churches saying they are also illegal."