India's commercial center brought to a standstill by heavy monsoons A public bus makes its way on a flooded road after heavy monsoon rains in Mumbai on Aug. 4. (Photo by Indranil Mukherjee/AFP)

Catholic dioceses in flood-hit Mumbai have opened their churches and institutions to accommodate thousands of people stranded in the city by heavy rain and flooded streets.

Thousands of train passengers were stranded in different areas of the city, Indian’s financial capital, and in other suburbs and towns of Maharashtra state as two days of continuous rain began to submerge rail tracks, forcing authorities to cancel or divert services.

“Several churches and other institutions in Mumbai and its surroundings have been partially submerged in the flood water following incessant rain in the past couple of days in the city,” said Father Nigel Barett, spokesperson for Bombay Archdiocese. Bombay is the former name of the city, which the archdiocese continues to use.

“People have been advised to move to safer places, or to our churches and schools on higher ground,” he said.

The region’s three major three rivers — Godavari, Krishna and Tapi — plus their ten tributaries flooded after authorities released water from overflowing dams after the region received average some 160-200 mm of rain in 24 hours since Aug. 1, reports said.

Five people are reported to have been killed this month in rain-related incidents. A further 35 people died during the monsoons that started in the region in July, according to media reports.

Relief for people who stayed indoors

However, Mumbai authorities said there was “no reason to panic and most people remained indoors” on Aug. 5 following widespread warnings of “very heavy” rain in the city.

Father Barret said the city had come to a standstill following the suspension of rail services, which he described as the “lifeline of Mumbai.” 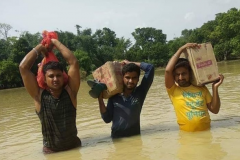 “Only those who ventured out were stranded on local train station platforms and other public places following the suspension of rail services,” he said.

Further disruption was caused by roadblocks caused by waterlogging and the authorities’ decision to switch off electricity in many parts of the city.

“We have opened all our churches to accommodate flood-affected people,” said Father Emmanual Kadankavil, the vicar general of Kalyan Diocese.

Parishioners provided food and took care of the immediate needs of those sheltered in the churches, the priest added.

Educational institutions in Mumbai and neighboring districts were closed on Aug. 5 following the warning from the weather bureau.

Sister Molly Thomas, the superior of Daughters of Sacred Heart of Jesus convent, said the flooding had been sudden and unexpected.

The church on the first floor was not flooded but the ground floor was completely flooded by the next day, she added.

The Tabor Divine Retreat Center, popularly known as Tabor Ashram, in Raite village, on the outskirts of Kalyan town, was among the worst affected.

“We have lost almost everything,” said its administrator, Vincentian Father Jacob Vattaparambil.

“A sudden flood on Aug. 1 night washed away more than 300 beddings, chairs, prayer books, computers, sound system and 10 air conditioners among other things.”

The center had suspended its programs indefinitely, he said, adding it could have been even worse.

“There was no loss of human lives but some 400 people attending a retreat had left just one day before the flooding,” he said. “That averted a huge human tragedy.”

Flooding in the area is not unusual. “But a flood of this intensity is the first we have suffered,” the priest added.