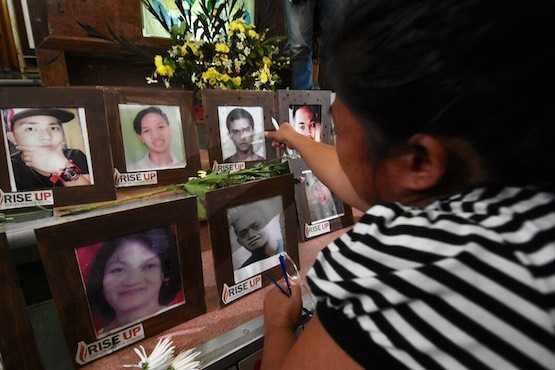 Normita Lopez touches a photograph of her slain 23-year-old son, Djastin, during a Mass to remember victims of the government's drug war killings in the country. (Photo by Angie de Silva)

Normita Lopez has a dream and she has written it down as a poem for her 23-year-old son Djastin, one of the thousands slain in the Philippine government's war against illegal drugs.

The poem is both a plea to God for justice and a pledge to her son who was killed next to railroad tracks in Manila's urban poor district of Tondo.

"Before my eyes close in this life, may your killers be brought to justice, my child," Normita writes in her elegy to her son who died on Sept. 20.

She wrote the poem while listening to a group of tribal people from the southern Philippines who shared their own experiences of killings and persecution.

"I was listening to them. Someone asked if I wanted to speak," sad Normita, who has since become a member of Rise Up for Life and Justice, a group of families of drug war victims and their supporters.

"I was suddenly filled with an urge to write," the mother of nine told ucanews.com on Oct. 31, the eve of All Saints' Day and the start of two days of remembering the dead in the Philippines.

At least a hundred people filled the San Isidro Labrador Church in a northern Manila parish that has seen 50 residents killed in just over a year.

It was the first attempt at poetry for Normita, who wrote the lines on her mobile phone.

Written in Tagalog, the language of the Philippine capital, the poem starts as every mother’s story, with memories of excitement over a wanted pregnancy, the joy of her son's birth, and the milestones in his life.

What followed were dark days that came with President Rodrigo Duterte’s campaign to rid the country of drug dealers and addicts.

"In one blink, they took my son's life, the son I love and will never embrace again," Normita wrote.

"I will never see his smile again, will never hear his jokes, and the laughter that filled our house."

She talked to her son, asking him to wait for their reunion in the afterlife. She talked to God, appealing that He grants her the grace to join Djastin when her time on Earth is up.

The poem ends with her prayer for justice.

Normita’s poem was passed from one mother to another, setting off tears among all those who attended the gathering.

Other mothers and fathers, wives and daughters and sons, and the human rights volunteers who work daily with the families of the victims, wept and hugged each other throughout the celebration of the Mass.

Father Gilbert Billena, parish priest of the host community, encouraged the families to find the courage to fight back.

"There is no law in this country and certainly, no law of God, that allows killings, especially of the defenseless and the innocent," said the priest in his homily.

"Let us fight the scourge of illegal drugs, but not through killing," he added.

The priest later told ucanews.com that rehabilitation programs, social services and employment for the poor who are forced into the narcotics trade "are the answers to the problem, but never killings."

Normita noted a contradiction in the police report on her son's death.

The report said Djastin was killed resisting arrest during a "drug-bust" operation. Later, the police issued another report, claiming the young boy was arrested for the killing of another resident.

"He was an epileptic," Normita said of her son. "He was frail. How could he be a killer?"

Witnesses said the police who accosted Djastin beat him up before shooting him.

More than 3,000 people have been allegedly killed in "legitimate" anti-narcotics police operations since Duterte took power in 2016.

Thousands more have been slain in what police labeled as "deaths under investigation," a category that includes what authorities describe as "vigilante killings."