Warning letter from congregation tells her to rectify her 'grave faults' 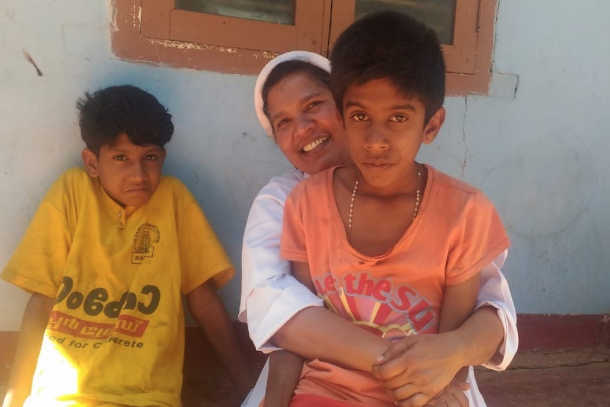 Sister Lucy Kalapura, who faces disciplinary action for alleged disobedience from her Franciscan Clarist congregation based in southern Kerala, is seen here during a house visit in her village in Manathavady Diocese. (Photo Provided)

Attempts by a religious congregation to discipline a Catholic nun have turned controversial in southern India with the media projecting the case as one of hierarchy targeting a woman who fought against a rape-accused bishop.

The issue erupted after the Kerala-based Franciscan Clarist congregation issued a "warning letter" to its member, Sister Lucy Kalapura, on Jan. 1.

In the letter, Superior-General Sister Anne Joseph, asked the 53-year-old nun to explain some of her actions that it said violated "principles of religious life."

The letter called itself the "first canonical warning with [a] threat of dismissal."

It also asked Sister Kalapura to meet Sister Joseph on Jan. 9 to rectify her "grave faults" according to congregation's rules.

Failure to comply would force the congregation to take the next canonical step, the letter said.

Local media said the nun was being targeted over her public support for five nuns, who held a street protest last September to press for the arrest of Bishop Franco Mulakkal of Jalandhar who is accused of raping a nun.

"Nun who backed agitation against bishop face church's ire" ran a headline in a local newspaper after the letter become public.

"A vengeful act," another headline said.

Superior-General Sister Joseph refused to respond to media requests after Sister Kalapura told reporters that she failed to meet her superior Jan. 9.

"We have nothing to offer to the press on this," Sister Joseph told ucanews.com on Jan. 9.

Meanwhile, Sister Kalapura told ucanews.com she has "nothing to rectify" as she has not violated her religious vows in any way.

"Those who entertain a wrong perspective of vows see violation in my actions. They should change their perspective," she said.

Not just about rape case

In the original letter the congregation accused Sister Kalapura of "defiance of authority and obstinate disobedience" citing several incidences.

The nun was also accused of spending some US$800 on publishing a collection of her poems in a book and buying a car worth $6,000 despite superiors denying her permission to do so. She also ignored her superiors who did not approve of her obtaining a driving license.

The nun, who is a schoolteacher, is also accused of belittling the Catholic leadership by making false accusations in the media during her support for the nuns who were calling for justice for the alleged rape victim.

Sister Kalapura said she decided to self-publish her book when the congregation refused to fund it, her having giving much of her salary to the convent for decades. The nun said she stopped doing this in December 2017 and brought a car with a bank loan. She is still paying back the loan with her salary, she said.

The car helps her interact with the village more, and includes things like taking the poor to hospitals, Sister Kalapura said.

Her convent in a Kerala village has no proper facilities for travel. "If we need a car for an emergency, we need to phone for a taxi and wait," she said.

The nun said her superiors were targeting her after she attended the nuns' protest without permission.

"They aren't such noble souls to grant me permission to join such a protest, if I seek it. So, I went without permission," she said.

The vow of obedience, she said "is not blindly taking commands from people who are devoid of a sense of fairness."