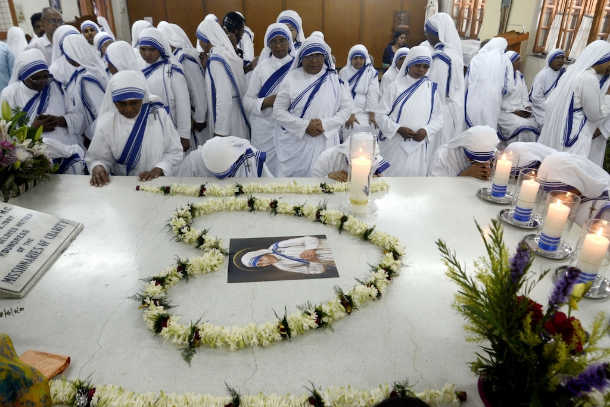 Missionaries of Charity nuns attend a prayer program organized on the 21st anniversary of the death of Mother Teresa at her tomb inside the congregation’s headquarters in Kolkata on Sept. 5, 2018. (IANS photo)

A federal investigation into the Missionaries of Charity congregation of Mother Teresa has been recommended by India’s Jharkhand state following allegations that nuns diverted funds for unspecified objectives.

The state government run by the pro-Hindu Bharatiya Janata Party (BJP) has recommended the federal Home Ministry to conduct a Central Bureau of Investigation probe into foreign donations received and spent by Missionaries of Charity and all its subsidiaries, media reports said on June 19.

In the past 11 years, according to Hindi media, the five main subsidiaries of Missionaries of Charity have spent 9.27 billion rupees (US$154 million) on purposes other than those specified in donations, which is illegal according to Indian laws.

Hindu groups in Jharkhand have accused Christians of diverting overseas donations so that they can be used for converting socially poor Hindu Dalits and tribal people in villages.

“Every single pie of donations is properly accounted and utilized only for the specified objectives … annual returns are filed as per law. We have no idea why we are being probed,” said Kumar, who is based in Kolkata, the eastern city where Missionaries of Charity is based.

“They [the congregation] submit all their documents once every three months, file annual returns and complete all other formalities on time without fail,” he said. “I don’t understand why this kind of a probe is needed.”

He said if a government agency needs any clarification, they can do it without a probe and “that is the standard practice.”

“This probe seems like an attempt to harass the nuns, who work for the rejected and the neglected poor in society. The state should help them in their work rather than harassing them,” the archbishop said.

St. Teresa of Kolkata, popularly known as Mother Teresa, founded Missionaries of Charity in 1950 to serve the “poorest of the poor,” as testified in her biography. The congregation has 5,167 members serving in 760 homes in 139 countries. It has 244 homes in India.

Missionaries of Charity first came under investigation in Jharkhand last July after a federal ministry ordered an inspection of all its childcare homes after a nun was accused of selling babies for adoption.

Sister Concelia Balsa was arrested along with staff member Anima Indwar following a complaint that Indwar took money to provide a baby but failed to keep the promise. They were accused of having already sold three babies from the home.

The 61-year-old nun, a diabetic, and Indwar remain in jail after several courts, including the Supreme Court, denied them bail.

The Jharkhand government ordered another investigation last July into the activities of 88 Christian-managed organizations to check if they were diverting foreign contributions for proselytization.

Following that probe, the state government in April this year sought a federal probe into the foreign donations of 31 Christian organizations.

Christian leaders say the investigations are part of a government plan to tarnish the image of the 1.5-million-strong Christian community in the state.