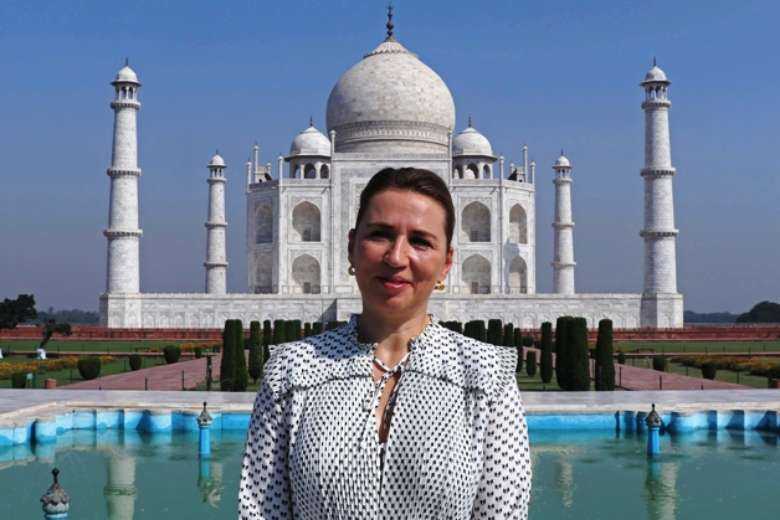 Denmark's Prime Minister Mette Frederiksen poses for pictures during her India visit at the Taj Mahal in Agra on Oct. 10, 2021. (Photo: AFP)

Denmark and its Prime Minister Mette Frederiksen have been honored with the Mother Teresa Memorial Award for Social Justice for the year 2021.

India's Harmony Foundation, which instituted the award in memory of Saint Mother Teresa in 2005, said it acknowledged Denmark as “one of the nations in the world which lives in harmony with nature” while also recognizing Frederiksen’s “exceptional leadership” in leading it “along the path of sustainable development.”

“Yes, Prime Minister Frederiksen is chosen for the overall performance of her country under her leadership in promoting green energy and other similar measures for saving the environment,” Abraham Mathai, founder of the Harmony Foundation, told UCA News on Jan. 4.

The award, including a certificate of honor and trophy designed like the habit of the nuns of the Missionaries of Charity congregation founded by Mother Teresa, was sent to the prime minister’s office through courier, he said.

“Though a small country in terms of its geographical vastness, Denmark is committed to being a frontrunner in all things green [and] is an inspiration for all,” said Mathai, a former vice-chairman of the minorities commission in the western Indian state of Maharashtra.

He cited Denmark’s wind energy industry developed over the past four decades as an example. Innovative technologies, smart regulations and support from the government have ensured more than 50 percent of the country’s electrical grid is powered by solar and wind energy, he noted.

The Harmony Foundation was founded by Mathai to establish social cohesion ... without any discrimination as to religion, caste, creed, gender or region

“The current government under Prime Minister Frederiksen has raised the country’s climate change targets by placing green transition at the center of its policy. Her government has pledged to introduce binding decarbonization goals to reduce emission to 70 percent,” Mathai added.

The Harmony Foundation was founded by Mathai to establish social cohesion and work toward the benefit of all communities without any discrimination as to religion, caste, creed, gender or region.