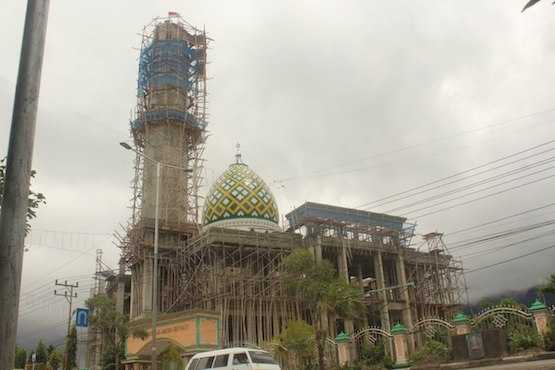 The under-construction minaret of Al-Aqsha mosque in Sentani, capital of Jayapura district in Papua province. The Communion of Churches in Jayapura district, known as PGGJ, opposes the construction of the minaret as it is taller than church buildings in the area. (Photo by Benny Mawel)

The height of a minaret at a Muslim mosque in Indonesia's predominantly Christian Papua province has Protestants and Catholics hot under the collar as they claim it is being built to deliberately overshadow nearby churches.

The Protestant Communion of Churches in Jayapura district, known as the PGGJ, has called for the minaret in the city of Sentani to be pulled down, a call backed by a local Catholic priest who called opposition to the tower a move to counter intolerance.

"Construction of Al-Aqsha mosque's minaret must be halted and demolished, while the mosque itself must lowered to the same height as church buildings in the area," Protestant Church leaders said in a statement sent to the government and Muslim leaders.

They also said their protest underlined their concern among Papuan Christians over the growing influence of Islam in Papua province. The Redeemer Parish church in Sentani will be dwarfed by the Al-Aqsha mosque, located only about 100 meters away. (Photo by Benny Mawel)

Franciscan Father Hendrikus Nahak from Redeemer Parish in Sentani told ucanews.com on March 22 that the Protestant protest was a move to counter intolerance, which was being displayed through ego and the need by the mosque's builders to overshadow nearby churches.

"Ego makes people fall into pride. Pride makes the faithful more concerned with the accessories of faith rather than the substance of faith, and people try to show it in life," said the priest whose church is about 100 meters away from the mosque.

"Accessories should not negate the substance of faith," he said. "Even a small building, which appreciates other believers, is not really a problem."

Referring to the growing influence of Islam, Father Nahak, who has served the area for about ten years, claimed the number of Muslims particularly in cities has increased.

"It can be seen in the construction of mosques and mushola [small mosques] everywhere. In Jayapura district this is very obvious," he said.

About 1.9 million of Papua's 2.8 million population are Protestants, 0.5 million Catholics and 0.4 million Muslims. The rest are Confucians, Buddhists and Hindus, according to the last census.

PGGJ chairman Reverend Robby Depondoye said their protest is also to try and buck a trend that is taking place across Papua.

"Old mosques are demolished and rebuilt to a design similar to the Al-Aqsha mosque," he said.

According to Marianus Yaung, a member of the PGGJ's law and education desk, the under-construction minaret is about 30-meters high while church buildings are only 15-meters high on average.

The Protestant group also called for a ban on the building of mosques in residential areas.

Meanwhile, the chairman of the Jayapura chapter of the Indonesian Ulema Council, Saiful Islam Al Payage said the issue should be resolved through "dialogue and peaceful means."