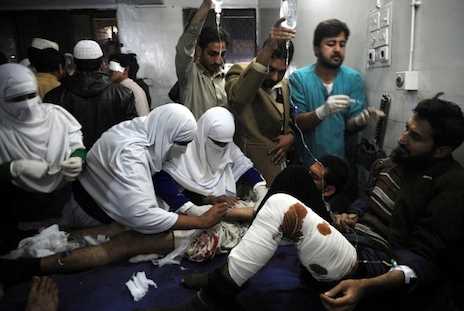 At least eight worshippers were killed and more than 50 wounded on Thursday when a powerful bomb ripped through a mosque during evening prayers in northwest Pakistan.

Thousands of people were inside the Peshawar Islamic preaching center in Peshawar, the capital of Khyber Pakhtunkhwa province, at the culmination of a weekly religious gathering.

“It was not a suicide attack. Explosives were hidden inside a cooking oil container,” said senior police officer Shafqat Malik.

No group has claimed responsibility for the attack so far as attacks have escalated across Pakistan.

“This new but chaotic wave of terror across the country is due to criminal neglect by the federal government that had earlier been empowered by all political parties unanimously to carry out negotiations with armed groups,” said Imran Khan, chief of the ruling party in the province.

Amir Muqam, senior adviser to Prime Minister Nawaz Sharif, narrowly survived a Taliban attack in Khyber Pakhtunkhwa this week in which his six guards were killed.