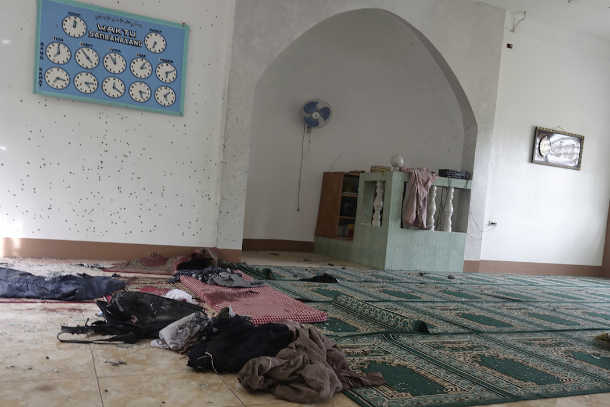 Belongings are seen inside a mosque in Zamboanga city on the southern island of Mindanao on Jan. 30 after a grenade attack killed two people just days after a deadly Catholic cathedral bombing and a vote backing Muslim self-rule. (Photo by AFP)

Two people were killed and four others wounded in a grenade attack on a mosque in the southern Philippines on Jan. 30, three days after a deadly bombing at a Catholic cathedral in a nearby province.

The attack occurred at about 1 a.m. when a grenade was thrown inside the mosque in the city of Zamboanga. Several Muslim leaders from a nearby province were resting in the mosque at the time.

Investigators said they were looking at whether the mosque attack was in retaliation for the twin-bombings at Our Lady of Mount Carmel Cathedral in the town of Jolo on Jan. 27.

At least 21 people were killed and 97 others wounded in that attack.

Governor Mujiv Hataman of the Autonomous Region in Muslim Mindanao said the mosque attack victims were from Basilan province and were in the city for a religious retreat.

"It is the highest form of cowardice and obscenity to attack people at prayer," said the governor of the Muslim region.

He condemned the attack on the mosque "with just as much vehemence” as he earlier condemned the twin-bombings at [the Jolo cathedral] during Mass.

"These are terroristic and barbaric acts," said the priest who has worked to foster inter-religious dialogue among Christians and Muslims in Mindanao for more than four decades.

"Our communities need to act in unity to prevent these dastardly acts from happening again," Father Calvo told ucanews.com.

He said people, regardless of faith, should "respect each other and work for peace."

Hataman called on Christians and Muslims in Mindanao "to come together in prayer for peace."

He said the goal of terrorism was to sow fear and confusion.

"We must stand united against the terrorists who would divide us and thus destroy all that we are working to build and establish in our communities," he said.

The interfaith group Moro-Christian Peoples Alliance said, "there was no justification for [the] inhumane act, an affront to our collective belief of respect for our faiths, lives and rights of our people."

The Philippine Council of Evangelical Churches blamed lawless people who wanted to "subvert the majority’s will and sincere desire" of the people for peace.

Non-government group, International Alert warned that the attack in Jolo would not be the last tragic event in Muslim Mindanao.

"The target and timing of this attack shows that a wedge is being driven between Muslims and Christians," the group said in a statement.

On Jan. 29, Philippine Defense Secretary Delfin Lorenzana said one of the explosions at the Jolo cathedral could have been a suicide bombing, but this had not been confirmed.

If proved correct, it would be the second reported case of a suicide bombing in the country.

On July 31 last year, a Moroccan national linked to the Abu Sayyaf group blew himself up inside a vehicle in the city of Lamitan in Basilan province, killing 11 people.

Bong Sarmiento contributed to this report from Mindanao.