Some 33 children among those detained on Nov. 29 in waters near the capital of Rakhine state 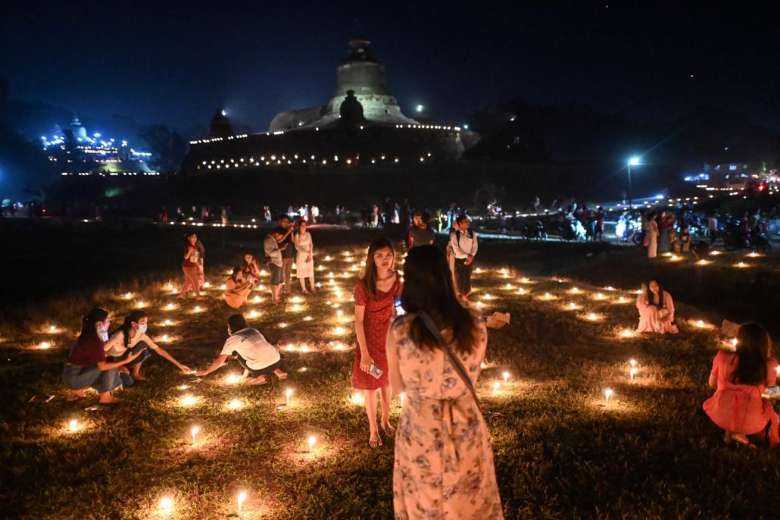 People take part in the Tazaungdaing festival, also known as the Festival of Lights, at the pagoda in Mrauk U in Myanmar's Rakhine state on Nov. 18. Many Rohingya Musims live in dire conditions in religiously divided Rakhine. (Photo: AFP)

More than 200 Rohingya Muslims aboard a boat fleeing persecution in Myanmar’s religiously divided Rakhine state have been arrested by the navy.

Some 33 children were among the 228 detained on Nov. 29 in waters near Sittwe, capital of Rakhine, along with five boat workers, according to the Global New Light of Myanmar newspaper.

The report said those detained will be handed over to police and immigration authorities.

It’s the latest attempt by members of the heavily persecuted community to flee the Buddhist-majority country.

Rohingya Muslims, who are effectively denied citizenship and freedom of movement in Myanmar, are regularly arrested for attempting to flee the dire conditions in Rakhine.

More than 600,000 Rohingya remain in Rakhine, subject to state persecution and violence, after the 2017 military crackdown that forced more than 740,000 to flee to Bangladesh.

More than 120,000 Rohingya remain in squalid camps in what are described as apartheid-like conditions in central Rakhine since deadly violence erupted there in 2012.

Rights groups claim that those who remain in Myanmar are trapped in appalling conditions, confined to camps and villages, without freedom of movement, and cut off from access to medical care, education and livelihoods.

Myanmar regards the Rohingya as Bengalis, saying that they are interlopers from neighboring Bangladesh despite most of their ancestors having lived in the country for decades.

Myanmar has faced mounting pressure from the international community over rights abuses against the Rohingya in Rakhine as proceedings against Myanmar and its leaders are already under way at the International Criminal Court and the UN’s International Court of Justice.

On Nov. 26, the Argentinian judiciary will investigate allegations of war crimes committed by the Myanmar military against the Rohingya under the principle of universal jurisdiction, which holds that some crimes are so horrific that they can be tried anywhere.

Six Rohingya women who remain in camps in Bangladesh have given remote testimony to the Argentinian court.

Tun Khin, president of the Burmese Rohingya Organization UK, hailed it as a historic move and said it represented hope not just for Rohingya but for oppressed people everywhere.

“The decision in Argentina shows that there is nowhere to hide for those who commit genocide — the world stands firmly united against these abhorrent crimes,” he said.