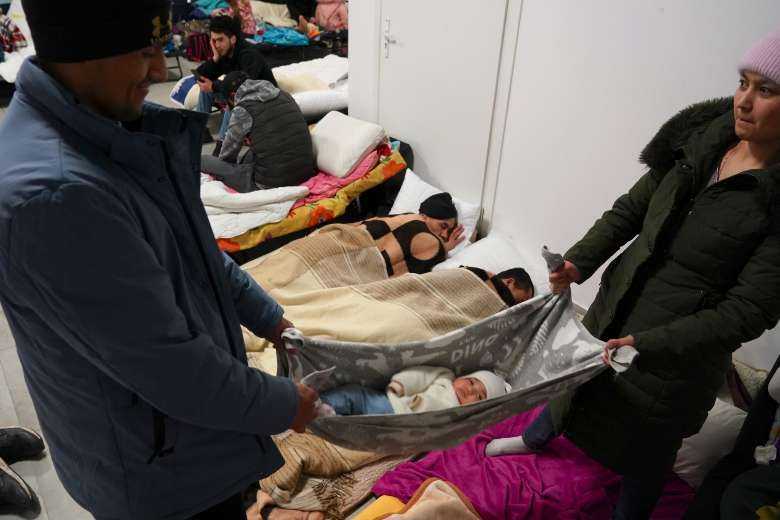 Refugees from Ukraine swing a baby to sleep as they wait for transportation to further destinations in an empty shopping center in Przemysl, Poland, on March 4. (Photo: AFP)

The UN children's agency UNICEF estimates that around half a million of them are youngsters.

The UN Refugee Agency (UNHCR) has projected that more than four million Ukrainian refugees may eventually need protection and assistance.

"The rate of this exodus is quite phenomenal," said UNCHR communications chief Joung-ah Ghedini-Williams.

"We know that there are many more on the move. Also there are possibly equal numbers inside the country that are internally displaced."

Here is a breakdown of where the 1,209,976 refugees tallied so far by UNHCR have headed:

Just over half of those who have fled Ukraine have crossed west into Poland, with UNHCR giving a figure of 649,903 people.

Before the current crisis, Poland was already home to around 1.5 million Ukrainians.

The country counts five border crossings with Ukraine, and several border towns such as Zahony have turned public buildings into reception centres, with ordinary people donating food and clothes, the interior ministry said.

UNHCR said 103,254 people who fled Ukraine are now in Moldova. Ghedini-Williams, speaking from the non-EU country, told reporters in Geneva that some are continuing on to Romania or Hungary to link up with family.

"What I saw yesterday, even between the border of Moldova and Romania, was quite staggering," she said.

"The queue of cars was as far as I could see... it was extremely clear, the level of fear and trauma.

"What we're seeing is the devastating toll that over a week of just unabated tragedy is having on people."

The UNHCR said 90,329 people had fled across Ukraine's shortest border to Slovakia, making up eight percent of the total number.

The UN Refugee Agency said nearly five percent of those who had fled Ukraine, 57,192 people, were now in Romania.

Most are passing through Siret in the north of the country, where a camp has been set up, along with a second near Sighetu Marmatiei.

"Our team in Romania is in discussions with Airbnb to lock down accommodation for about 100,000 migrants in Poland, Slovakia, Hungary and Romania," said Dillon.

"We're mobilising to deliver food aid and other assistance, non-food items, along the borders of Poland and Romania today."

The UNHCR said 53,300 people had fled across Ukraine's longest border since the invasion began.

Some 384 people had crossed north from Ukraine into Belarus, the UNHCR said.

The refugee agency said nine percent of those who had fled Ukraine into neighbouring countries, 110,876 people, had already moved on towards other European states.

Karolina Lindholm Billing, the UNHCR representative to Ukraine, estimated Tuesday that a million people had been internally displaced by the invasion.

She cautioned that the agency still did not have reliable figures.