More than 100,000 rally against Pakistan Taliban Pakistani protesters denounce the Taliban during the rally on Sunday

More than 100,000 people rallied in Karachi on Sunday to call for strong military action against Islamic militants as another bomb blast killed 13 people in the country’s northwest region, officials said.

Women, children and members of minority communities took part in the demonstration led by the liberal political party, Muttahida Qaumi Movement, to express solidarity with the Pakistani armed forces in their fight against Taliban insurgents.

Addressing demonstrators by phone, the movement’s London-based leader Altaf Hussain warned that Pakistan faced an ongoing threat from the growing menace of extremism.

"The Taliban are a cancer for Pakistan. They are cancer for the whole of humanity," he said. "Those responsible for endangering the security and territorial integrity of Pakistan can never be trusted."

He cautioned policy makers and public representatives that the Taliban are hostile toward Pakistan and will remain a threat.

A resolution was also passed during the rally, calling on the government and security agencies to deal with the insurgents with and iron fist. The statement strongly condemned suicide attacks and bombings.

"Today’s gathering announces that Sikhs, Hindus, Christians and members of other minorities are equal citizens of Pakistan," the statement read.

The statement called for a boycott of political parties that justify the Taliban's violence.

Talks between the government and Taliban broke down this month amid a spate of Taliban-led attacks that left scores dead and many more injured. 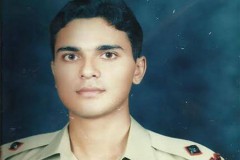