Branding of additional groups, individuals as communist rebel sympathizers makes them vulnerable to attack, they say 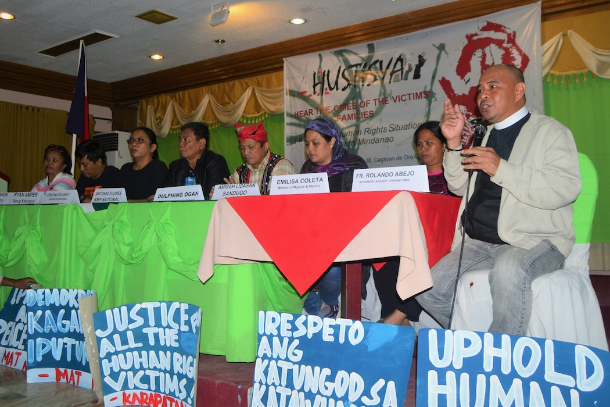 Church leaders and human rights groups in Mindanao hold a media briefing following the release of a list that labels several individuals and organizations of having links with the communist rebel movement in the Philippines. (Photo by Jigger Jerusalem)

The "red-tagging" of church leaders and activists has intensified with priests of the Philippine Independent Church included on a new list of people alleged to have ties with communist rebels.

Aside from the priests, the list also included the Rural Missionaries of the Philippines, the Alliance of Concerned Teachers, the Union of Peoples Lawyers, and youth group Kabataan.

The list, containing the names of 19 individuals, including a journalist and his family, was distributed outside the venue of a human rights forum in Cagayan de Oro City in Mindanao last week.

"We fear for our lives and liberty knowing that we are on this list," said Bishop Felixberto Calang of the Philippine Independent Church whose name was also on the list.

The Protestant prelate said the list is part of a series of "smear efforts," including the painting of graffiti on the walls of churches in some areas of the southern Philippine region of Mindanao. 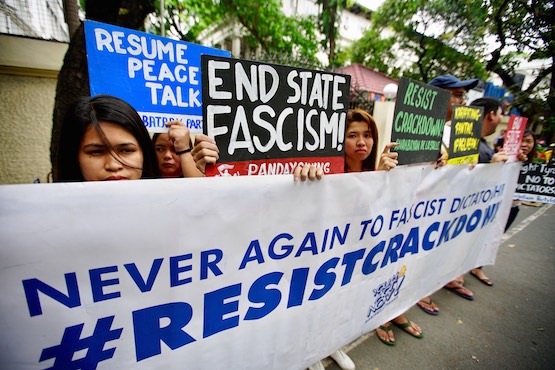 "When the police and military can just plant evidence against innocent people they claim are 'enemies of the state,' that is lawlessness," said Bishop Calang.

He said the "red-tagging" of church leaders and activists will make them vulnerable to attacks.

"They are also obstructing the church from carrying out its mission of accompanying the poor in their struggle for justice," said the bishop.

"Their objective is to prevent us from exposing the truth about martial law violations in Mindanao," he added.

Martial law was declared across Mindanao following an attack on the city of Marawi by gunmen aligned with the so-called Islamic State group in 2017.

Aside from the church leaders, also included on the list is local journalist Leonardo Vicente Corrales, associate editor of the Mindanao Gold Star Daily, his wife and his son.

"We denounce this list as it does not only intimidate me in my work as a journalist, but has endangered my family," he said.

Cristina Palabay of human rights group Karapatan accused the military of being behind the list.

"We have repeatedly raised how these arbitrary and baseless accusations incite threats to the lives and security of named individuals, the worst of which is they become victims of killings," she said.

In a statement, the Philippine army’s 4th Infantry Division in Mindanao said it "does not engage in cheap propaganda that can cause confusion and division in our society."

Its commander, Brigadier General Nemecio Gacal, said the list called for a stop to the "spreading of unverified reports."

Early this week, President Rodrigo Duterte warned against attacks on church leaders, saying "a religious has nothing to do with the vagaries of life."