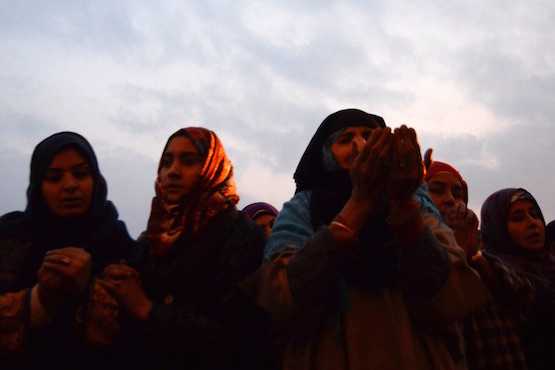 Kashmiri Muslim women pray outside a shrine in Jammu and Kashmir state, India’s only Muslim majority state. Reports say more people are disassociating from religion in the region, which some say is in protest against the growing religion related violence across the world. (Photo by Umar Shah)

According to revised census data, Jammu and Kashmir, India’s only Muslim majority state, houses the highest number of people without a religion in India.

This has led some to argue that the state is witnessing a new generation of people shunning religion to protest religious-based violence.

The census data for Jammu and Kashmir, published by local media in early January, showed 20,000 people not wanting to associate with any religion. In all of India’s other 27 states combined, this number was only around 33,000.

Although people who stated they have "no particular religion" only account for 0.16 percent, the number remains significant for the state and more so when compared with national averages.

Farther Roy Mathews of Jammu-Srinagar Diocese, which covers the entire state, said he was "dismayed" by the findings. "People have the freedom to reject religions. But religion teaches us values to live by in a society," Father Roy said.

Prominent religious scholar and author, Molvi Ghulam Ali Gulzar, told ucanews.com that the growing tendency to disassociate with religion is "not atheism, but escapism" and the trend is on the rise among Muslims in Kashmir.

He said terror activities by groups like the so-called Islamic State are responsible for people shunning their faith in Kashmir. "Youth in Kashmir are very sensitive. Everything is on the internet these days. They have seen how innocent people are slaughtered and killed by Islamic State in Syria and Iraq."

"To protest such activities they have shunned religion," Molvi Gulzar said.

According to Moulana Ghulam Rasool Hami, who leads the Muslim organization Karwani Islami Kashmir, the trend is not a good one. "If people reject religion, it means they will set their own principles of what is right and what is wrong. That is something which will have disastrous impact on society at large," he told ucanews.com.

Abid Simnani, a scholar of Sociology at Kashmir University, told ucanews.com that it is the first time in the state’s history that the number of people who follow atheism has come to fore. Earlier, even if one wasn’t professing a faith, it wasn’t stated emphatically, he said.

"Disassociating oneself from every religion in the census speaks for itself. They will be a new minority in Kashmir and modernization is one reason behind such a trend," said Professor Ahmad.

In the last 30 years, an estimated 100,000 people have died in Jammu and Kashmir, including civilians, militants and army personnel, after groups began an armed struggle for freedom from Indian rule.

"In a state like Jammu and Kashmir that has been witnessing bloodshed and mayhem for decades, the youth are frustrated and could be seeking a way they believe will give them solace," said Professor Ahmad.

However, Professor Sheikh Showkat Hussain, Head of International Law Studies at the Central University of Kashmir, questions the veracity of the findings. He believes census data about Kashmir if often fabricated and the new data "could be part of these fabrications" or "the surveys were made without proper ground research," he said.