The number of displaced tribal people in the southern Phillippine island of Mindanao continues to rise as another group of villagers sought refuge at temporary shelters in Davao City this week.

"We cannot return because of the presence of the soldiers," said Ellen Manlibaas, leader of a peasant organization in the area. "The people are scared of the soldiers."

Manlibaas said the people decided to leave their community after soldiers burned the house of a village leader and the office of a local cooperative.

The same soldiers were earlier accused of trying to demolish an indigenous school named after an Italian Catholic missionary.

The new wave of displaced people joined some 700 others who are living in a temporary shelter at the United Church of Christ in the Philippines compound in Davao City.

The International Coalition for Human Rights in the Philippines, based in Rome, has issued a statement denouncing the killings of tribal people that resulted in the earlier displacement of villagers.

Buboy Salle, the group's spokesman, urged church leaders to "take action and be compassionate because the tribal people are not just Filipinos but also children of God."

The U.N. Refugee Agency has documented 6,000 indigenous people who have fled their homes in Mindanao because of atrocities and threats from government soldiers and paramilitary groups.

"Until security is provided in these rural [indigenous peoples] communities... indigenous people most likely will remain displaced away from their livelihood for a long period of time or encounter repeated displacement from fear of armed actors in their communities," the U.N. agency warned. 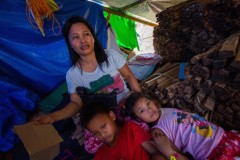 From March to October 2015, the U.N. agency also documented the killings of 14 indigenous leaders, activists and villagers, including children, in five incidents of extrajudicial killings and four massacres.

A spokesman for Philippine President Benigno Aquino said the government is not turning its back on the tribal people of Mindanao.

"The government is continuously addressing the situation of the indigenous peoples in Mindanao, and is working tirelessly to ensure their safety and to protect them from unnecessary acts of violence," said government spokesman Herminio Coloma.