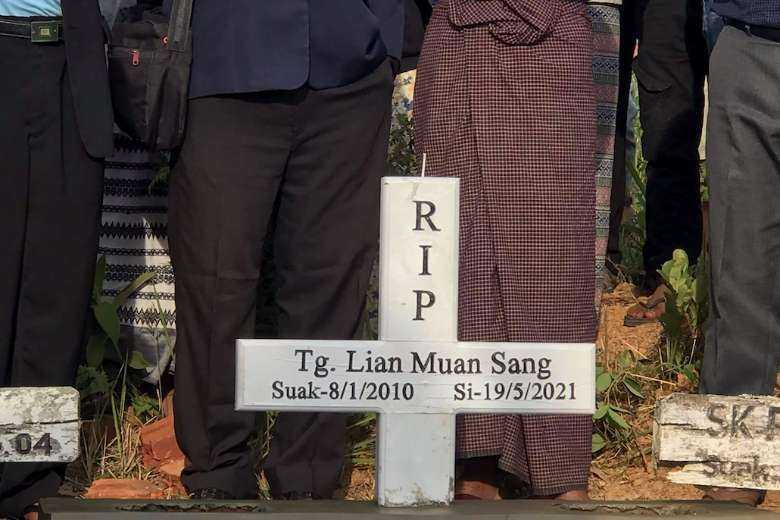 People attend the funeral on May 20 of Lian Muan Sang, an 11-year-old boy who was killed after handling an explosive device beside a road in Tedim township, Chin state, amid attacks by the military following clashes with ethnic rebels. (Photo: AFP/Tedim Post)

Nearly 1,000 people from a predominantly Christian region in Myanmar’s Chin state have fled and taken refuge in churches as fighting escalates in the region.

They left their homes in Mindat town to escape the military’s indiscriminate attacks on civilian homes, according to Christian sources and media reports.

A clergy house, convent and boarding school in Mindat suffered damage and several civilian homes were damaged by the military's artillery fire on Sept. 22.

Around 150 elderly, women and children, mostly Christians, have taken refuge in a Catholic church's compound while around 100 are in a Buddhist monastery in Kyaukthuh, a small township in Magwe division. Mindat and Kyaukthuh townships belong to the Diocese of Hakha.

Mang, a church social worker, said the parish has provided food and shelter to people while Caritas Myanmar is planning to provide another shelter, food and non-food items.

“For the people who arrived in the church and monastery, it’s the second time fleeing their homes as they had fled earlier when fighting erupted in Mindat township in May,” Mang told UCA News.

The latest civilian exodus follows the entire population of 8,000 people of Thantlang town in northern Chin state fleeing their homes following the military assault that destroyed at least 19 houses and killed a young Baptist pastor on Sept. 18 following fighting with local resistance groups.

Civilians from impoverished Chin state have borne the brunt of renewed fighting after gunfire fell silent for decades. More than 16,700 people have already been displaced in several townships in Chin state since fighting flared up in May.

Meanwhile, more than 206,000 people have been displaced in Christian stronghold areas such as Chin, Kayah, Kachin and Karen states due to the escalation of the conflict since the Feb. 1 coup. More than 3 million people are in need of aid, according to the UN's latest report.

The military has continued its reign of terror in the Southeast Asian nation despite the United Nations warning of a human rights catastrophe that shows no sign of abating.

UN secretary-general Antonio Guterres has called for an urgent international response to the political crisis in Myanmar following the military coup.

In a document circulated on Sept. 29, the UN chief said he feared that the military’s grip on power would become increasingly difficult to counter.

“It is urgent to mount a unified international and regional response to help to put Myanmar back on the path to democratic reform,” Guterres said.