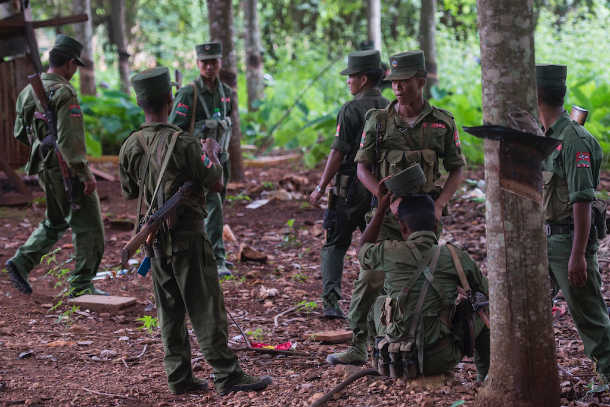 Members of the United Wa State Army taking a rest in a rubber plantation on the Thai/Myanmar border. (Photo by Ye Aung Thu/AFP)

Another 17 managed to get to the Lahu Baptist church in Kengtung, of eastern Shan state, in early November.

Reverend Lazarus, general secretary of the Lahu Baptist Convention in Kyaing Tong, said all 21 male students, aged in their late teens, are now being given food and medical support.

The four most recent formerly captive student arrivals had been unable to eat and became weak while escaping through jungle, Rev. Lazarus told ucanews.com.

He said the students told him that they were forced to attend military training by the United Wa State Army (UWSA) including on how to use firearms.

"When they arrived initially, they had some psychological problems," the reverend said.

"But they are coping with it as they now feel safe taking refuge in the church."

Rev. Lazarus said 20 female students remain at the headquarters of the Wa ethnic army, which is backed by neighboring China.

He expressed fears for these female students and renewed an earlier call for their release.

The students' ordeal began in mid-September when they were forcibly recruited as part of a UWSA clampdown on Christianity.

The students were taken from Mong Pawk township where 52 churches have been shut down and three have been destroyed, said the Lahu Baptist Convention. The students' Bible school was closed.

China is believed to be pressuring the UWSA to conduct the campaign that has included the detaining of pastors.

However, no replies had been received.

Three Salesians and a diocesan priest, 11 nuns and nine lay teachers were expelled by the UWSA, which grew out of the main communist party in Myanmar.

The UWSA leadership has deemed only churches built between 1989 and 1992 to be legal while banning the construction of new churches, outside clergy and the teaching of religion in schools.

Christians comprise around 30 percent of the estimated 450,000 Wa population.

The 30,000-strong UWSA is accused of drug trafficking.