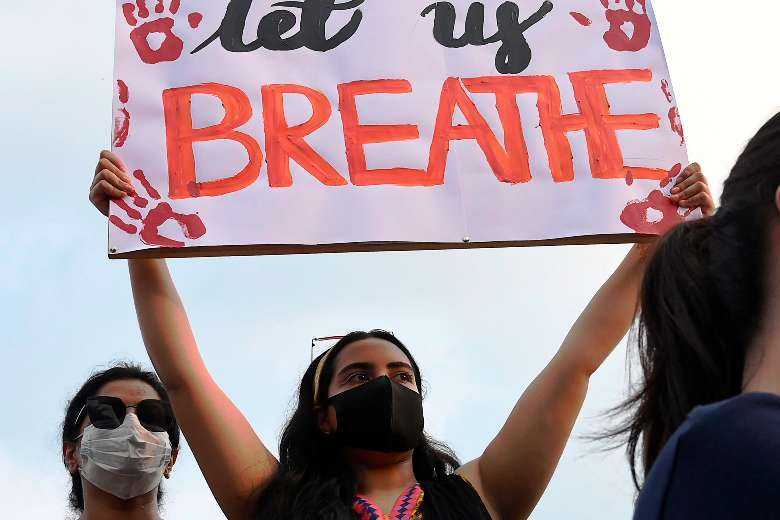 A women's rights activist holds a placard during a demonstration in Lahore, Pakistan, on July 24. (Photo: AFP)

Moral decadence is the absence of dedication to the strict moral framework presented by religion or culture in a society. If people of a particular society fail to respect the framework, they bring shame to the religious and national identity of the nation.

The recent incident of an assault by hordes of men on TikTok star Ayesha Akram at the Greater Iqbal Park area of Lahore on Pakistan’s Independence Day on Aug. 14 led to mixed reactions in print, electronic and social media.

Some criticized her for crossing the red line marked by religion for women in an Islamic society while others condemned the incident.

I could not help expressing myself. Pakistan is ranked as the world’s sixth most dangerous country for women by a survey carried out by Thomson Reuters and doesn’t fare any better in the World Economic Forum report on gender equality.

Ayesha was assaulted by a pack of wolves disguised as human beings. She was groped, tossed in the air and her clothes were torn into pieces by a mob of around 400 men, including young boys.

The Greater Iqbal Park is a site that reminds us of the aspirations of our founding leaders who secured a separate homeland so that people may enjoy religious, political, social and cultural freedom. Muhammad Ali Jinnah’s struggle was against exploitation, unfairness, intolerance and, above all else, the power play of the dominant group.

It is a shame that his ideology emphasizing that “no nation can rise to the height of glory unless their women are side by side with them” was ridiculed. Such an ignominious representation of a proud nation left no room for any more national pride.

The incident disturbed many enlightened souls. I was also quite disturbed, though there have been a number of such shameful cases reported every other day in recent years.

All previous incidents of sexual abuse or harassment of young girls, boys, minors, animals and even dead bodies should serve as evidence of moral decadence in our society.

It was very obvious to contemplate the causes and solutions. The first three causes that came to my mind were the social structure in which male members of our society are thought to be the hub of power, their upbringing by parents as autonomous beings supported by sociocultural and socioreligious norms, and their deviance from the true teachings of religion.

The tacit social acceptance of their power gives confidence to male members of a society that they are not accountable to anyone for whatever they do. So they take the liberty to cross all boundaries marked by religion, culture or law of the country.

As an educationist, the first and foremost thought that popped up in my mind was to change the social structure by imparting quality education that emphasized the elimination of gender discrimination and highlighted the importance of women in the formation of a healthy society.

I soon realized how innocent this thought was when the number of cases of sexual harassment against women perpetrated by Ph.D.-holding professors in universities popped up before my eyes, though many may have been proven guilty and been fired from their jobs.

A question arose in my mind. Why did education fail to be an agent of change?

Maybe something divine could work wonders to change the minds and behavior of people in our motherland and help us develop a healthy society.

I thought people are deviating from religious teachings and becoming more prone to moral depravity.  But before I could settle down on this idea, the reported incidents of sexual abuse by clerics in madrasas or educational institutes came to my mind.

But my vision gets blurred at the sight of the rapid rise in moral depravity, social defilement and degeneracy in our society

The latest such incident involved a mufti in his early seventies exploiting his student for a year until a video of his crime became viral. I was reminded of Geoffrey Chaucer’s words: “If gold rust, what shall iron do.”

I love my country Pakistan and visualize it as “a land of the pure,” as described by Chaudhary Rehmat Ali in 1933.

But my vision gets blurred at the sight of the rapid rise in moral depravity, social defilement and degeneracy in our society, especially when it comes to the treatment meted out to women.

The decadence of moral values in Pakistani society can be curtailed only if the state starts to implement existing laws against discrimination, abuse and exploitation while promoting respect for the dignity of others alongside integrity, equality and tolerance.

Azeem Alphonce teaches English literature at Forman Christian College in Lahore, Pakistan. The views expressed in this article are those of the author and do not necessarily reflect the official editorial position of UCA News.

JAWAD AHMAD
I really like the way you presented that horrible incident. Our governments didn't invested or not intrested on nation building neither someone demanded. Our only priority is under passes & overheads for smooth traffic flow.
Reply