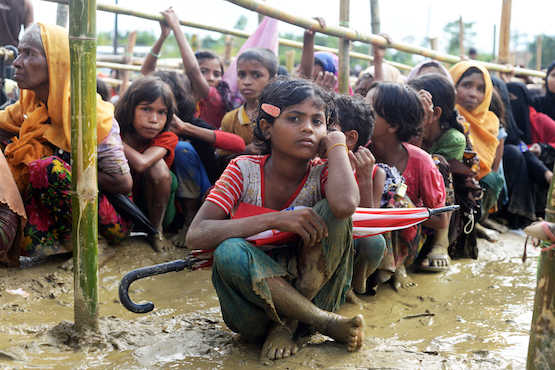 Strong winds and torrential monsoon rain have added to the woes of Rohingya refugees living in makeshift camps in Bangladesh.

Rainwater has flooded campsites and left pools of water, many of which are contaminated with human waste, adding to the misery of refugees living with little or no shelter, food, or access to health care, International Organization for Migration (IOM) said in a press release on Sept. 30.

More than 500,000 Rohingyas have crossed the border into Bangladesh after the Myanmar military launched 'clearance operations' in Rakhine State following the Aug. 25 attacks by militants on 30 security check points. Hundreds of civilians have died in the exodus, with accusations of rape and the burning of villages being leveled at the Myanmar army.

Niranjan Rudra, 50, is a Rohingya Hindu living on an abandoned chicken farm near Kutupalong refugee camp with his seven family members. Some 500 Hindus from about 165 families have also fled the violence in Rakhine.

The roof of the dilapidated chicken farm has holes, so water trickles in when it rains.

"We don't have any food crisis but we are suffering because of the rain. Every day rainwater intrudes into our dwelling and damages our belongings. Other Hindus are also facing the same conditions," Rudra told ucanews.com.

Rudra said his six children were suffering from fever and hunger as they were drenched by the rain and they couldn't cook enough food because of the conditions.

He said as hundreds of thousands of Rohingya had poured into Cox's Bazar, getting aid was very difficult.

"We need to look after the children but we also need to get aid, especially food," he said. "There are crowds wherever aid is distributed and it's very difficult to access it."

Alam said he bought a polythene sheet for 200 Taka (US$ 2.50) from a local market and set up a makeshift tent for the family, but it had proved useless against the bad weather.

"The polythene shelter flew away in a light storm, forcing us to live under the open sky. We have an umbrella that our children use for protection from the rain, but it's not enough," he said.

"As it rains often we can't use the kerosene stove for cooking. We only eat when we get some food from local people, otherwise we'd starve. Our children and elderly parents are hungry most of the time."

A Caritas food and aid package for more than 10,000 Rohingya families, is supposed to start this week. The agency is also planning to eventually help provide shelter.

Mazharul Islam, a disaster management officer with Caritas Chittagong, has witnessed the suffering caused by the bad weather first hand.

"Refugees need strong shelters and good drainage systems to help them get rid of water-logging. More attention is needed on services related to water, sanitation and hygiene," he said.