After a Covid shutdown of 20 months, students and parents are relieved to resume classroom education 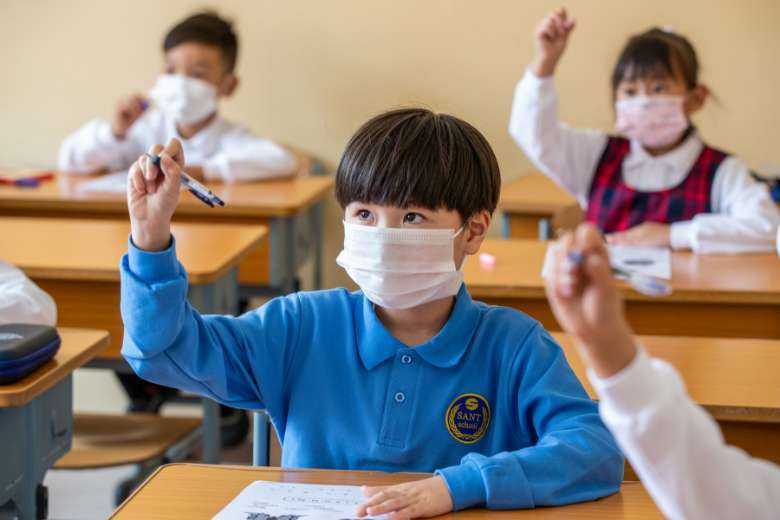 Students attend a class at the start of the new semester in Ulaanbaatar, the capital of Mongolia, on Sept. 1 after schools and kindergartens were closed since January 2020 amid the Covid-19 pandemic. (Photo: AFP)

Guiding her younger brother from their yurt on the outskirts of Ulaanbaatar, 15-year-old Urangoo Basandorj could barely contain her excitement for the Sept. 1 return to school as Mongolia's children mark the end of 20 grinding months of exile from education.

The country of three million has taken some of the world's toughest and most enduring measures against the Covid-19 pandemic, shutting schools and kindergartens since January 2020 and plunging children into a purgatory of remote learning with patchy access to technology.

Nearly two-thirds of the population has been fully vaccinated yet Mongolia reported 3,726 new virus cases on Sept. 1 — the highest daily increase since the pandemic hit the country.

Still, masked students in blazers filed into a primary school in the capital Ulanbaatar, where classrooms were kitted out with temperature monitors, hand sanitizer and social distancing stickers.

"I heard the news about reopening schools and I was super excited ... I was so happy and I dreamt of my classmates all night," Urangoo Basandorj told AFP. "It was so difficult not being able to meet my friends ... the online class wasn’t nice."

Parents across Mongolia — a landlocked country where nearly a third of people live below the poverty line — have complained of varying access to education since the pandemic first emerged in neighboring China, with televised classes condemned as limited and online learning restricted to those with internet access.

We have such a high rate of first and second-dose vaccination. It's time to think about the children's future

For the urban poor and remote herding communities, education has been patchy at best, conducted inside small, congested homes where some families lack televisions or a reliable power supply.

The reopening saw parents living in yurt districts near the capital — city dwellers from Mongolia's nomadic culture — express delight that their children were returning to school.

"When they are watching TV lessons [in the yurt], there are so many interruptions ... cooking, little siblings crying, fire in the stove, and water boiling," said Urangoo's mother, Dolgorsuren Tumurbaatar. "Schools were closed too long. It's time to adapt and live with Covid."

During the school closures, public school students relied on "TV lessons" — lecture videos without any interaction — or online classes with limited outcomes.

"Usually, teachers speak on their own and some students even go to sleep while they turn off camera and mic," Urangoo Baasansuren added.

For the lucky few, expensive vastly oversubscribed private schools provided applications such as Google Classroom and even on-to-one tutoring to ensure nearly two years of education were not lost to their pupils.

But for many others, in schools which routinely have 50-70 pupils per class, those years have gone.

At a school in the capital, father-of-three Munch Purevdorj said it is now the right time to reopen schools.

"We have such a high rate of first and second-dose vaccination," he told AFP. "It's time to think about the children's future."