Catholics attend a liturgical program at Holy Rosary Catholic Church in central Dhaka in this file photo. Many Catholic parents are worried that their children are increasingly uninterested in church liturgy and programs. (Photo by Chandan Robert Rebeiro)

Sixty-year-old Catholic Peter* has a well-earned reputation in the southern Bangladesh port and industrial city of Khulna for being a man of good faith and action.

Peter recently retired from his long-time job with a local non-governmental organization.

His only daughter, and two of his four sons, have married.

But despite there being much to be happy about in his life, there is also a measure of disappointment.

Peter's first two sons took up three years of priestly formation in a seminary more than 12 years ago.

He wanted to see at least one of them become a priest, but neither lived up their father's dream.

After returning from their seminary, the duo didn't complete their graduation, despite Peter being a college graduate.

Peter's eldest son fell in love with a Muslim girl and got married in court, despite both families disapproving.

"A few years later, their marriage was solemnized in the Catholic Church," Peter told ucanews.com. 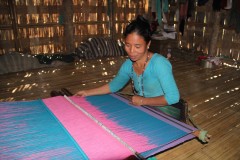 New social network a boon for kids in Bangladesh "My son and daughter-in-law have been living with us since then and we have a 12-year-old granddaughter," Peter said.

The other son who went off to the seminary, upon returning to the family home, did not continue his studies, failed to find a stable job and stopped attending church services.

"We have tried to change his ways, but he has been reluctant," Peter said about his son drifting away from faith and family to carouse at night with friends.

Another of Peter's adult sons is a college graduate and has a job with a marketing company in the capital, Dhaka. The youngest son is also in Dhaka, where he is studying for his high school graduation.

But they are also no longer interested in church life and activities.

During holidays, when they come home, the sons get upset when he asks them to join church programs and Sunday liturgies.

Peter's third son, who works for the marketing company, is 28 years old. He says having a busy life, including a six-day working week, mitigates against church attendance.

"During weekends I have many important things to do, so I don't have time to go to church," he told ucanews.com, adding that this did not necessarily make him a bad Catholic.

"I don't commit any wrongdoing and I have a value-based life — I don't steal, tell lies or do harm to others."

Nonetheless, Peter feels frustrated about his male offspring moving away from religiosity and the church.

Peter blames bad companions, a desire for money and modern technology for what he describes as a "decline of faith" among his sons.

However, Peter has been always happy about his daughter, both before and after her marriage.

"My daughter is a perfect girl," he said, adding that she was successful in her studies, attends church regularly and has a happy family life.

Father Mintu L. Palma, a family counselor and judicial vicar of the inter-diocesan matrimonial tribunal based in Dhaka, cites a trend towards alienation of young Catholics from a life of faith.

However, most Catholics still go to church, especially on Sundays, he said.

Between 50 and 60 percent of the more than 15,000 parishioners of his Holy Rosary Church in central Dhaka "actively practiced" their religion.

In urban areas, where life is busier and more modern, Catholics tended to be less adherent to their faith, whereas rural Catholics were more inclined towards the church and religious life, the priest told ucanews.com.

Sometimes people wanted to attend church but were "squeezed" by modern family and work pressures.

However, a Jesuit priest and youth motivator, Father Pradeep Perez, said church programs for the young were often monotonous and did not reflect modern challenges.

Often, church leaders told young people what "to do and not to do" without explaining why, the priest noted.

"There is a philosophical base for church rules and laws," Father Perez said.

For example, the church opposed "artificial family planning" because it limited natural love between men and women.

"The same goes for mixed marriages," the priest said in relation to difficulties encountered when couples were not of the same religious faith.

Father Perez added that youth constitute the future of the church.

"But young people don't have much say in the decision-making processes of the church," he said.

"It must change, or we might end up losing our next generation of Catholics."

*Peter and his family have asked not to use their real names.