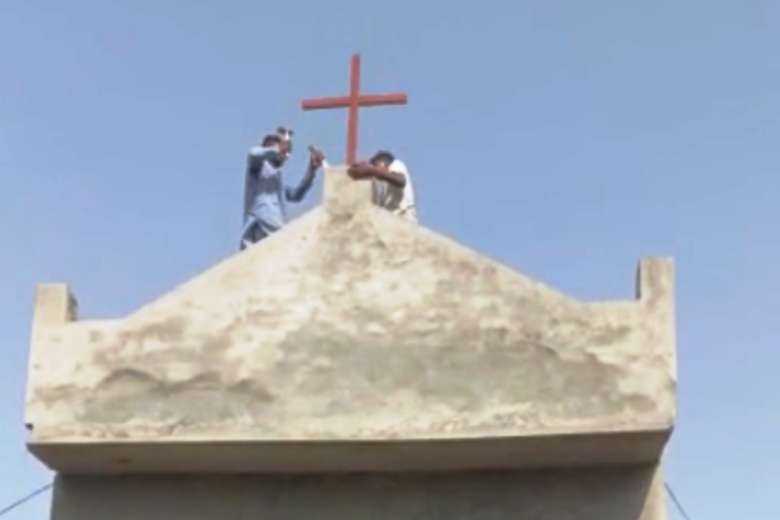 Laborers remove a cross from the Church of the Nazarene after objections from an angry Muslim mob in Pakistan's Punjab province. (Photo supplied by Pastor Rafaqat Yaqoob)

Pastor Rafaqat Yaqoob watched helplessly as laborers removed the cross from the Church of the Nazarene after an angry mob of more than 200 local Muslims surrounded it.

“Demolish it. Make them [Christians] flee,” shouted the mob led by a cleric from the local madrasa (Islamic religious school). Pastor Yaqoob called the police.

“We used to worship in houses. The neighbors were informed about the construction of the house of God. There was no opposition,” he told UCA News.

However, the mob began to gather as Christians started Sunday worship at 11am on Aug. 29. “I asked the madrasa official to discuss it later in the afternoon but they started stopping families from entering the building,” Pastor Yaqoob recalled.

The police wanted peace to be maintained in the area and knew that the illiterate clerics at the madrasa would not understand, so they were happy to prevent an attack or demolition of the building by the mob.

“The deputy commissioner accused us of turning a house into a church overnight. Local Christians are now being harassed,” Pastor Yaqoob said.

As a nation, we condemn this use of force and religious hypocrisy

The Church of the Nazarene has 80 members and is the only place of worship for Christians in Tibba Sultanpur, a Muslim-majority town in the south of Pakistan's Punjab province. Christian brick kiln workers had started constructing the church in July on a 50 square meter vacant plot located amid their houses.

The clerics got a stay order on the construction and Christians are now facing a social boycott, according to Khalid Shehzad, a Catholic member of the National Lobbying Delegation.

“They want to purchase the houses of the fleeing Christians at low prices,” he alleged.

“Pakistan’s President Arif Alvi had assured minorities of equal rights while celebrating Minorities Day on August 25 at the President House in Islamabad. Now he has gone silent. Are minorities free?” Shehzad questioned.

Photos posted on social media showing the removal of the cross evoked emotional reactions from the community. “Shame, shame,” said Shamaun Bhatti in a Facebook post.

“The present government and their followers are issuing false statements. They are betraying foreign countries. As a nation, we condemn this use of force and religious hypocrisy,” commented another social media user.

A delegation from the Church of the Nazarene met Punjab Minister for Human Rights and Minorities Affairs Ejaz Alam Augustine.

“The church construction was illegal. I directed them to obtain a no-objection certificate (NOC). I am also in contact with the local administration to control the law and order situation in the town,” he told UCA News.

As per law, the district coordination officer issues NOCs for places of worship and seminaries. Before issuing the NOC, the committee examines the site and gets the consent of the locals. It also takes action against any illegal construction.

However, Augustine refused to comment on the demolition, describing it as a “matter out of his domain.”

For years now, UN human rights mechanisms and experts have expressed concern regarding violations of freedom of religion or belief in Pakistan

In May, a mob of more than 200 raided Christian families in Okara district of Punjab province.

Last year a village near Baloki was forced to remove the cross from a church under construction after threats by local Muslims. Baloki is 60 kilometers from Lahore, the capital city of Punjab province.

In 2018, the Full Gospel Assemblies Church in Nayya Sarabah village of Punjab province was similarly sealed.

For years now, UN human rights mechanisms and experts have expressed concern regarding violations of freedom of religion or belief in Pakistan. It has been recommended that Pakistan should repeal or amend its so-called blasphemy laws in accordance with the country’s human rights obligations

In July, the International Commission of Jurists called on Pakistan to urgently respond to the serious and ongoing persecution of individuals from religious minority groups by state and non-state actors across the country.

MOHAMMED SHUAIB SHEIKH
I am for religious freedom. It appears that the church in question was built on a piece of "vacant plot", which can't be justified. However it is not for the people to demolish it. They should have gone to the relevant authorities and complained.
Reply