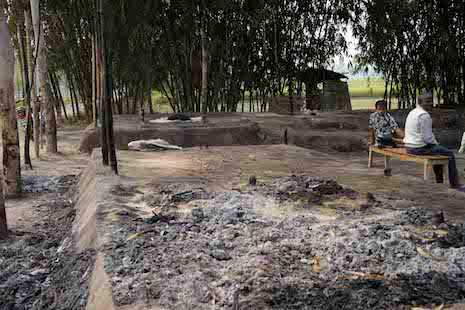 The remains of homes belonging to Catholics after a mob allegedly set fire to them on Nov. 5. (Photo by Antuni David)

Four Catholic families in northern Bangladesh had a narrow escape when a group of Muslims burned down their homes, accusing the families of witchcraft.

The families were attacked early on Nov. 5 in Kamarpara, in Panchagarh district.

They say a Muslim mob tried to lock them inside their houses before setting them on fire.

The attack was sectarian and followed a long campaign of abuse against them, they said.

"For more than a year, Muslim youths from a neighboring village accused us of practicing witchcraft and told us to leave the village. They abused us in public and threw bricks at our houses," said Ramni Das, 57, who lost two houses in the attack.

"They wanted to kill us by burning us alive, but we managed to escape. We have lost everything," said Das, a cane worker.

Neighbors came to their rescue and pulled them from the burning buildings, he said.

Das has filed a complaint with local police against seven people over the attack. Police have yet to make any arrests.

Local police officials say they are investigating the alleged attack.

"The suspects … have fled the area. We are helping to mediate for compensation," said Dinabandhu Nath, a local police official.

Ainul Islam, a local Muslim shopkeeper and the uncle of one of the accused, said his nephew was being falsely accused.

"I know some youths including my nephew have had problems with Christians, but I don't think they were behind the arson attack," he said.

"Personally, I know the victims to be good people. For the past year, I have tried to calm the situation and have publically said the witchcraft accusations were false, but I didn’t think things would reach such an extreme," said Hossain.

"We are trying to resolve the matter without the need of a court case, so that Hindus, Muslims and Christians can live peacefully in the future."

There are some 300 Catholics in Karmarpara who were once from the Hindu Ksatriya (warrior) caste. They embraced Christianity decades ago, but say they are often exploited and abused by Muslims due to their poor socioeconomic status.

Local church officials say they are providing aid to the families.