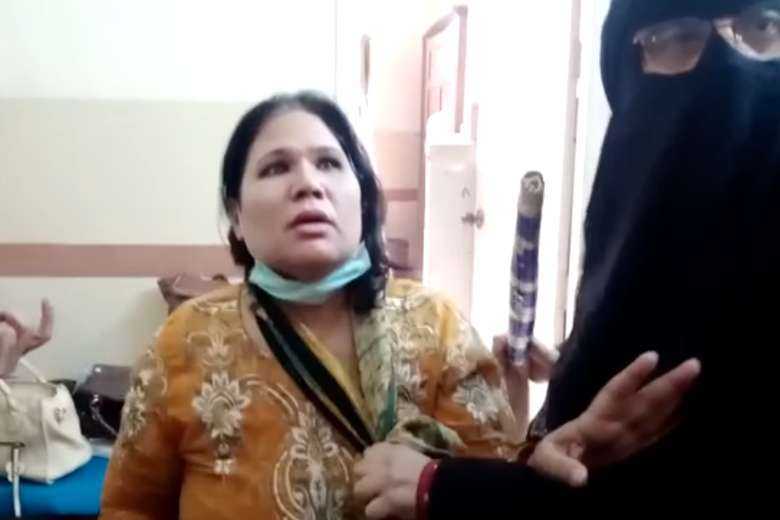 Tabitha Nazir Gill with one of her burqa-clad attackers at Sobhraj Maternity Hospital in Karachi. (Photo supplied)

Tabitha Nazir Gill was slapped and stripped for alleged blasphemy at the Pakistani hospital where she had worked for nine years.

Videos showing the assault on the 30-year-old Christian nurse at Sobhraj Maternity Hospital in Karachi spread on social media on Jan. 28, moments after she was accused of insulting all prophets including Prophet Muhammad, Prophet Abraham and Prophet Adam.

“She urged others to say ‘Jesus’ to solve their problems. Don’t speak the name. She commits blasphemy. We shall bury her. We will sacrifice our generations for the dignity of the prophets,” shouted Muslim nurse Nasreen while beating Gill.

“Close the gate. Don’t let her escape. Beat her. Why did you speak of our religion? Rub your nose on the ground. Repent from Allah,” shouted others.

Gill was dragged from the third to the first floor of the hospital where visiting burqa-clad women also attacked her, some with brooms.

“I didn’t do anything like this. I am a Christian. We don’t swear but still I swear by Jesus and the Bible. This is their plan. Let me call my husband,” pleaded Gill amid the mob. She was tied up with ropes, forced to submit an apology and locked in a room before the police were called.

The investigating officer initially cleared Gill of blasphemy charges citing a “misunderstanding between colleagues” and allowed her to leave the police station. However, the same afternoon, police registered a blasphemy case against the gospel singer under Section 295-C of the Pakistan Penal Code that mandates the death penalty for blasphemy against Prophet Muhammad.

In the first information report, midwifery student Saba accused Gill of stating that Prophet Ishmael was born of adultery.

“She stated that Ishmael stomped the Zamzam holy water we drink. Adam committed adultery with Eve. She twisted the name of Muhammad, adding that Muhammad is nothing. Nobody came after Jesus,” stated Saba.

According to the Centre for Legal Aid Assistance and Settlement (CLAAS) UK, a Christian charity dedicated to helping persecuted Christians in Pakistan, nearly 60 people including nine Christians and 47 Muslims (40 from the Shia community) were charged with blasphemy last year.

At least three innocent people were killed — one Christian, one Ahmadi and one Muslim.

“They are jealous of this person and are now using the umbrella of the blasphemy law. I dare say that she has neither blasphemed the Prophet nor the Holy Quran,” he said.

“I have said this a thousand times. If Allah Almighty has said that blasphemers must be killed, then I can say that Almighty Allah is not Rahman-e-Rahim [benevolent and merciful]. If his Prophet has commanded to kill blasphemers, then he can never be called Rahmat-e-Alamin [mercy to the world].

“There is no use in pleading to the Sindh government, politicians and all the VIPs. They never did anything before and they will do nothing even now. They are afraid of these ignorant people and might face the same death as [slain Punjab governor] Salman Taseer. They don't have any guts.”

Taseer was assassinated in 2011 for supporting Asia Bibi, the Catholic woman acquitted of blasphemy in 2018 after spending eight years on death row, and demanding reforms to the controversial blasphemy laws.

“Many people are asking to remove the videos, but is there any action against jihadi women who accused her of a serious allegation and tortured her? How long will we tolerate this? Where is the law? RIP interfaith harmony in Pakistan,” he said.

Nasir Saeed, director of CLAAS-UK, said the Christian nurse has gone into hiding.

“Police have a basic and important role to determine whether blasphemy has been committed or if the accusations are fabricated just to settle personal scores,” he said. 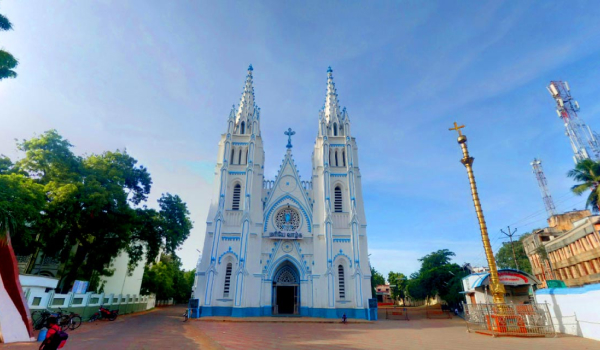