After being beaten by over 30 men, a priest remains in a critical condition Father Jose Kannumkuzhy (in white cassock) sits inside the police station after he was attacked. (Photo supplied)

A priest and three lay officials were attacked by a mob as they sat in their car outside a police station in the southern Indian state of Tamil Nadu.

All four have been hospitalized and the priest, Father Jose Kannumkuzhy, the procurator of the Ramanathapuram Syro-Malabar diocese, remains in a critical condition.

Father Kannumkuzhy and the laymen were attacked by 35 men while they were waiting to see police regarding the arrest of a priest and two others from a church-run care center.

"Father Kannumkuzhy fell down on the road and the mob kicked him, stamped him on the stomach and wanted to kill him by hitting him with a boulder," Father Veeppattuparambil.

The men were dragged and beaten for 2.5 kilometers, said the priest. Their phones also were stolen.

Father Veeppattuparambil said the public did not dare to intervene to halt the attack and the police failed to show up or send an ambulance. They were finally made to walk back to the police station, he said.

"To add fuel to the fire, the police made the bleeding victims stand before the media and allowed them to take photographs as if they were culprits," Father Veeppattuparambil said.

The priest said the incident shows that there "is no safety for religious minorities" in any part of India.

He noted attacks on Christians and Muslims by pro-Hindu groups have increased since the pro-Hindu Bharatiya Janata Party government came to power in 2014. 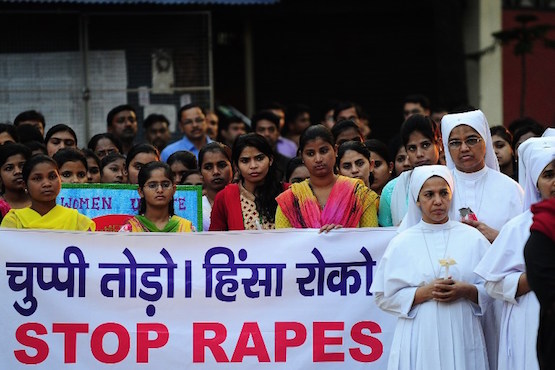 Violence against India's Christians on the rise Bishop Paul Alappatt of Ramanathapuram said the attack was "planned" otherwise "it was not possible for so many people to gather at such speed," and said it was connected to a fight at a Capuchin-priest run AIDS care center.