Vietnamese people hope the Trump-Kim summit will bring peace and prosperity to North Koreans, but local human rights defenders have voiced their disillusionment.

Washington is demanding North Korea dismantle its nuclear weapons program while Pyongyang is seeking numerous concessions, including an end to punishing sanctions.

Along streets leading to the Metropole Hotel where Trump and Kim held meetings, police erected iron barriers amid tight security. Plainclothes security officers and military vehicles were deployed on streets. Meanwhile, many schools and shops were closed in central Hanoi. A motorcyclist rides past a Vietnamese soldier standing between armored personnel carriers during the second summit between U.S. President Donald Trump and North Korea's leader Kim Jong-un in Hanoi on Feb. 28. (Photo by Noel Celis/AFP)

But the extra security in the city did not put off some locals from publicly showing their support for the summit.

“We’re here to welcome the summit and we hope it brings positive results to people on the Korean Peninsula, especially North Koreans,” Lan said. 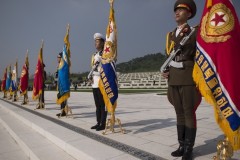 North Korea in the atom age 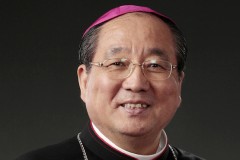 Catholics called to pray for peace as inter-Korean summit looms 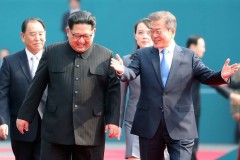 “We expect the two leaders to work for the future of North Koreans and help them escape poverty, live in peace and open the door to the rest of the world,” said the 75-year-old woman who experienced suffering and losses during the Vietnam War. Nguyen Thi Lan and her daughter Tran Thi Lan Huong pose for a photo in Hanoi on Feb. 27. (Photo by Joseph Tran)

Nearby was Le Thi Mai, a vendor who sold flags and summit-themed clothes.

“We encourage the two leaders to work for peace on the peninsula and integrate North Korea into the international community,” Mai said.

Nguyen Van Duan, an egg trader from neighboring Long Bien market, said he trusts Trump to have enough goodwill to make peace with North Korea along the lines of current U.S.-Vietnam relations.

Duan said when the U.S. normalized relations with Vietnam it created conditions for the country’s economic development. “Our life has improved much as a result,” said the 40-year-old.

Duan said he treats Americans as friends although his uncle died fighting against U.S. forces in southern Vietnam in 1968. Sources told ucanews.com that security officers were sent to addresses of some activists to prevent them from leaving their homes. Some were also detained or kidnapped and their whereabouts remain unknown.

Many local activists had hoped the summit could improve human rights issues in their country. But they believe that Trump failed to raise human rights violations in earlier meetings with Vietnamese President Nguyen Phu Trong and Prime Minister Nguyen Xuan Phuc.

Local media reported that Trump and his Vietnamese counterparts witnessed the signing of commercial trade deals worth some US$21 billion.

“The U.S. chose Vietnam to host the summit as a sign to show that it wants North Korea to copy the Vietnam model,” he said.

The priest said that he thinks North Korea also wants Vietnam’s system so that it could maintain its totalitarian control.

Father Phong said the U.S. will use both communist countries to limit China’s influence, which means that Washington will not apply pressure on the Vietnamese government to improve its human rights record.