A Rohingya refugee girl in front of her temporary home at Kutupalong refugee camp in Cox's Bazar of Bangladesh on Sept. 9, 2017. (Photo by Stephan Uttom/ucanews.com)

Rohingya refugees and rights activists have mixed feelings over the Bangladeshi government's first list of refugees for repatriation to their strife-torn home in Myanmar's Rakhine State.

"Myanmar asked for a family-wise list, so we have prepared this one and handed it over. Now it's up to them to confirm their identity and residency and start repatriation," Khan told the media.

Khan said Bangladesh has prepared a list of about 1.1 million new and old Rohingya refugees who fled Myanmar to escape persecution in various phases since the 1970s.

"Once the list is finalized, we will hand it over to Myanmar for verification and start the actual repatriation process," he added.

Harez Taiyub, 60, a Rohingya community leader from Nayapara refugee camp in Cox's Bazar, said refugees are confused and frustrated as they don't know what the future has in store for them.

"Refugees have lost everything, so they are anxious about what they will eat and wear. They want to go back but want a guarantee that they can live in peace and happiness there," Taiyub, living in Bangladesh since 2000, told ucanews.com. 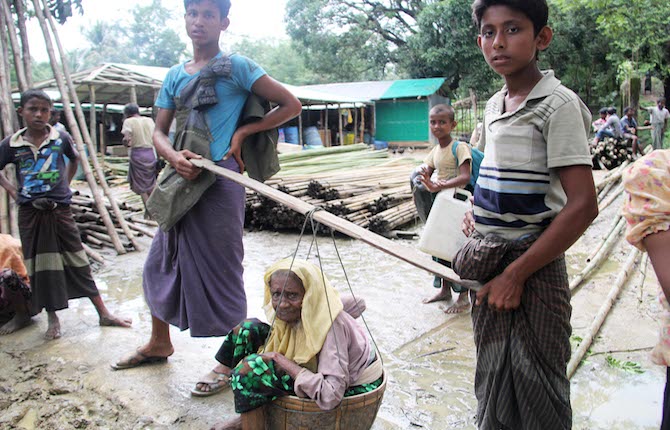 Two Rohingya children carry their grandmother to a dry place during monsoon in the Thangkhali area of Cox's Bazar of Bangladesh on Sept. 9, 2017. (Photo by Stephan Uttom/ucanews.com) 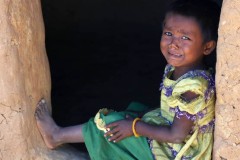 Hashem Ali, 36, who arrived at Kutupalong refugee camp in July last year, said that besides including the United Nations in the repatriation process, Myanmar authorities need to compensate refugees for the loss of their homes and belongings in the conflict.

"It will take us decades to recover from the loss, so the government must help us with compensation. We want to get back our property and want to live in peace," Ali told ucanews.com.

Theophil Nokrek, secretary of the Bangladeshi Catholic bishops' Justice and Peace Commission, gave a cautious welcome to the handing over of the first refugee list.

"Bangladesh has shown a visible interest in solving the Rohingya crisis, but we cannot claim the same about Myanmar," he said.

"While listing is going on, many Rohingya continue to flee to Bangladesh. It seems Myanmar has not done enough to secure Rakhine State, which is the first priority before refugees can be sent back."

Bangladesh and Myanmar recently signed a deal to repatriate about 770,000 Rohingya who fled deadly violence in Rakhine by the military and extremist Buddhists.

The Rohingya are officially stateless in Myanmar as they are denied citizenship in the Buddhist-majority country. Many in Myanmar regard them as recent illegal Bengali immigrants from Bangladesh despite historic proof that the Muslim presence in Rakhine can be traced back as early as the eighth century.

Myanmar’s government invited a third group of ambassadors and diplomats to northern Rakhine on Feb. 15.

The group included ambassadors from Germany, Norway, the Netherlands, Finland and Italy, diplomats from Brazil, Denmark and New Zealand and officials from UN organizations such as UNICEF and UNOCHA.

A Rohingya elder in Buthidaung, northern Rakhine, said dozens of families have continued to flee into Bangladesh as they face difficulties in daily survival and fears for their security.

On Feb.18, a total of 496 Rohingya left Maungdaw for Bangladesh on nine boats, according to Myanmar’s Ministry of Home Affairs.

Chris Lewa, director of the Arakan Project that monitors Rohingya rights in Rakhine, said it had received reports of new rape cases, arson attacks and arbitrary arrests in Buthidaung. “How can anyone talk about voluntary repatriation?” she asked.

Lewa said hordes of people continue to flee from Buthidaung due to starvation and insecurity, while in Maungdaw bulldozers are razing to the ground all remains from what were once Rohingya villages.