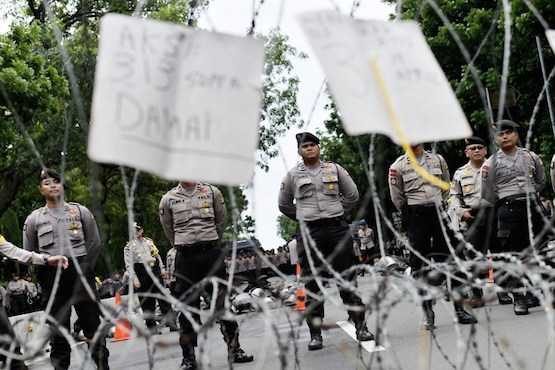 The arrest of a hard-line Islamic cleric on treason and conspiracy charges in Indonesia underlines national police chief Tito Karnavian's growing assertiveness over internal security as the Joko Widodo government tries to address a disturbing new trend that mixes Islam with populism.

Unlike the armed forces, Karnavian reports directly to the president, suggesting Widodo is fully aware of and approves of every step his police chief takes since he hand-picked the former Detachment 88 anti-terrorist unit commander last August over more senior officers.

Muslim People's Forum (FUI) leader Al Khaththath and four other suspects were taken into custody the night before a March 31 rally against ethnic-Chinese Jakarta Governor Basuki Purnama, but little is known about claims they were plotting to overthrow the Widodo government.

Purnama, also known as Ahok, is fighting blasphemy allegations as he faces a second-round April 19 showdown with former education minister Anies Baswaden, a once well-regarded reformist who is now playing the Islamic card in his efforts to win over Jakarta voters.

The two candidates still appear to be neck-and-neck as the campaign goes into its final days, but there have been signs that the primordial strategy adapted by Baswaden and his political backers may be starting to backfire.

A key figure in the conservative coalition seeking to prevent Purnama's re-election, Khaththath is a graduate of the state-run Bogor Agricultural Institute and was once active in the Indonesian chapter of the radical international organization Hizbut Tahrir.

The March 31 rally drew only 10,000 protestors, a far cry from the 100,000-200,000-strong crowds attending similar anti-Purnama rallies last November and December which raised questions whether Widodo himself was also in the crosshairs.

That, and the diminishing number of hardliners appearing at Purnama's regular trial appearances, points to waning enthusiasm among Jakarta's 7.1 million voters, 77 percent of whom turned out for the first round of the election on Feb.15.

Whether that means religion — and Purnama's blasphemy case — is becoming less of a factor in the gubernatorial race is still not clear. Widodo, a member of the Indonesian Democratic Party for Struggle (PDI-P), which supports Purnama, has called on religious leaders and politicians not to mix religion and party politics, warning this could lead to divisions in society.

Unsurprisingly, that has fallen on deaf ears among groups making up the conservative National Movement to Support the Indonesian Ulema (GNPF-MUI), despite the country's two largest Muslim organizations, Nahdlaul Ulama and Muhammdiyah both openly condemning the March 31 rally.

Said Aqil Siradj, chairman of NU's executive council, maintains that holding prayers in the street is haram, or forbidden, but conflicts within the progressive and conservative wings of the leadership has raised doubts over whether the 35 million-strong organization still speaks with one voice.

The outcome of the election depends to a large extent on those who cast their ballots for Agus Yudhoyono, the losing third-placed candidate in the first round, with Baswaden theoretically needing 58 percent of that vote and Purnama 42 percent.

The police have already told the conservative lobby to drop its plan to "monitor" all of Jakarta's 13,000 polling stations, a move Purnama's supporters fear will intimidate voters into casting their ballots along religious lines.

Still, the longer the campaign goes on, the more it is likely to favor Purnama as voters look beyond religion in their choice of someone who can solve Jakarta's many problems.

Flooding — exacerbated by a seemingly endless wet season — continues to test the patience of local residents, and a recent TomTom traffic survey ranked Jakarta as the third most congested city in the world after Mexico City and Bangkok.

The incumbent will benefit here from the progress that is being made on a massive infrastructure-building program that includes the Mass Rail Transit (MRT), Light Rail Transit (LRT), inner-city roll roads and interchanges and an expanded elevated busway system.

Purnama's blasphemy trial will probably not reach a verdict before the election. Azyumardi Aztra, director of the graduate school of the Islamic State University, still believes he will eventually be sentenced to jail, pointing to scores of previous blasphemy cases that all ended in convictions.

But if Pernama wins, then the South Jakarta District Court, already struggling to make sense of conflicting testimony, will be confronted with a compelling demonstration of public opinion suggesting the case should not be used to disqualify Purnama.

A recent survey by the Public Opinion and Policy Research (POPULI) Center showed that 71.4 percent of the respondents are worried about rising intolerance in the Indonesian capital, with 22.6 percent saying it had reached an "unsettling" level.

Despite government and foreign concerns, Azra does not believe the mix of Islam and populism will also become a feature of the 2019 legislative and presidential elections when Widodo, who is considered an abangan, or part of the less orthodox Muslim classes, is expected to seek a second term.

Azra sees little change in the pattern of national voting, where only 12-14 percent of an 88 percent, Muslim majority electorate has consistently voted for the three sharia-based United Development (PPP), Justice and Peace (PKS) and Crescent Star (PBB) parties.

PPP and PKS currently share 79 seats between them in the 560-seat House of Representatives, down from 95 seats in the 2004-2009 Parliament, while PBB has failed to win a seat in the past two legislative elections, garnering the same 1.8 million votes.