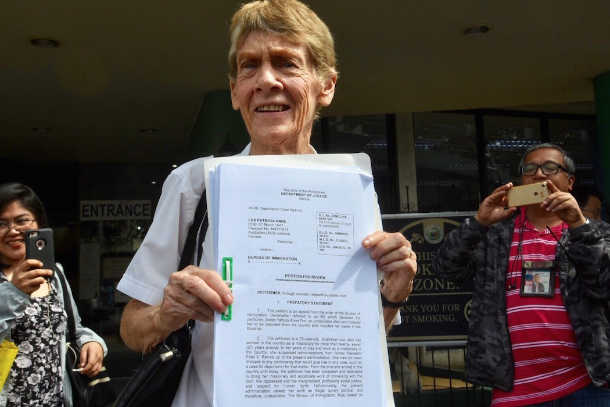 Australian missionary nun Patricia Fox files a petition for review of her case before the Philippines' Department of Justice on Sept. 3 to ask for a reversal of the deportation order against her by the Bureau of Immigration. (Photo by Angie de Silva)

"I've done nothing wrong," she said defiantly soon after being arrested and released a day later by Philippine immigration officials in April this year for alleged anti-government activities.

In late August, as the Sept. 5 deadline for her deportation neared, Sister Patricia Fox, an elderly Australian missionary and volunteer for a group of agricultural workers in the Philippines, stoutly maintained her innocence and vowed: "I will see my deportation case to the end."

Sister Fox, 71, the superior of the Notre Dame de Sion in the Philippines, a congregation of Catholic nuns, studied law in her home country but decided to become a missionary instead.

She is frail-looking, and hardly the type who can hurt a fly. But beneath the fragile exterior is a staunch belief that missionaries like her must not only preach to the faithful, but also to help the poor improve their lives and the oppressed to obtain justice.

"I love the Philippines. I do not want to leave the country if the situation here is like this," she said.

Sister Fox said immersing herself among ordinary farmers and workers is part of her mission in the Philippines.

But the government of Philippine President Rodrigo Duterte considers her work as meddling in local affairs instead of propagating her faith.

Sister Fox was arrested by immigration officers on April 16, 2018, at her residence in Quezon City. She was held at the Bureau of Immigration for joining an International Fact-Finding and Solidarity Mission, which was investigating the human rights situation under martial law in Mindanao in the southern Philippines.

Her arrest and detention took place a day after Giacomo Filibeck, a Socialist Party official from the European Union who had criticized Duterte's war on illegal drugs, was summarily deported.

A broad coalition of progressive forces later issued a statement condemning her "unjust detention and the deportation proceedings initiated against her. She is no criminal or undesirable alien. She has long been in the Philippines helping the poorest of the poor."

Lawmakers also expressed support for the embattled missionary: "The immigration department is barking up the wrong tree on this one. Helping the poor is not a crime and joining peaceful activities to advocate peasant welfare and human rights is not against the law."

Sister Fox's case reveals a disturbing pattern under the Duterte administration of targeting foreigners suspected of engaging in "political activities."

These activities may include participation in fact-finding missions looking at human rights violations in the course of the government's war on illegal drugs, or joining rallies protesting the killing of indigenous peoples suspected of having links with communist rebels.

While Duterte's spokesman recently gave assurances that the Australian nun would be allowed to challenge the deportation order issued by the Bureau of Immigration and to exhaust all legal remedies under Philippine law, it appears that her fate is already sealed, and it is only a matter of time before she is escorted under heavy guard to a plane that would take her back to Australia.

The deportation move against Sister Fox underscores a dangerous drift towards strongman rule in the Philippines a little over three decades after Filipinos sent dictator Ferdinand Marcos into forced exile via the bloodless People Power revolt in February 1986.

Should Sister Fox be deported back to Australia for working alongside groups supporting the poor and disadvantaged farmers, workers and indigenous peoples, then the Duterte administration is sending a stern warning to Filipinos and foreigners alike that they can speak out and protest against injustices and human rights violations only at their own peril.