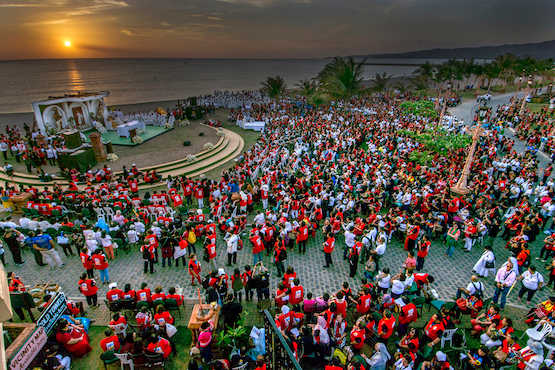 Delegates gather for the 'mission sending' of participants to World Apostolic Congress on Mercy in Bagac town, Bataan province in the Philippines, on Jan. 20. (Photo by Angie de Silva)

Christians who want to be "missionaries of mercy" should be wary of lies and irresponsible behavior being peddled by social media, warned a Catholic bishop.

"Fake news and trolls are not mercy. They are lies," said Bishop Ruperto Santos of Balanga during the "mission sending" of delegates at the World Apostolic Congress on Mercy in the Philippines.

The five-day international gathering, which brought together some 6,000 devotees and supporters of Divine Mercy to the country, ended on Jan. 20 in the town of Bagac, Bataan province.

Bishop Santos urged delegates to remember that they are "messengers of mercy" and their words and pronouncements should be consistent with their mission.

"[Words of mercy] are words that build up the characters and improve human relationships. Those are words which renew the person and uplift our spirits," he told the gathering.

The bishop, who is coordinator of the global meeting in Asia, said the "common denominator" of the spiritual acts of mercy is about words that are "truthful and liberating."

"Verbal abuse and gossiping are not mercy. They are character assassinations," he said, adding that mercy is "to sustain life, not to make it suffer. It is to prolong life, not to suppress it."

The international meeting became a venue for Philippine church leaders to expound on their "pro-life" stand against issues confronting the country.

In his address, Manila Auxiliary Bishop Broderick Pabillo called on Catholics not to be silent about the killing of suspected drug users and dealers.

"If we are to be a church of the poor, [we] should speak out for the poor, to listen to them, and to be available for them," he said.

Cardinal Orlando Quevedo of Cotabato in the southern Philippines, said the absence of public protest against the killings shows the "dichotomy" between the people’s faith and life.

"Our faith is one level and the other level is daily life," said the cardinal, adding that the seeming approval of the killing of suspected criminals "is a symptom of that split-level spirituality."

Archbishop Ramon Arguelles of Lipa, meanwhile, said the streets are "not the only way to show our objection to such ungodly ways."

He said the church cannot be silent on issues concerning the dignity of human life. "Ours is expressing what is right in all avenues and all places," he said.

The meeting on mercy became an opportunity for church leaders to introduce church programs.

Bishop Jose Oliveros of Malolos announced that even before the government's anti-narcotics drive, his diocese has been operating a rehabilitation center since the 1980s.

"It is a place where we, Catholics, show mercy and compassion to our brothers and sisters who lost their path," said the bishops.

Father Patrick Chocholski, secretary-general of the congress, said the next apostolic congress will be held in Samoa, in Polynesia, in 2020.

Introduced by the Vatican in 2008, the first ever gathering on mercy in Rome coincided with the third death anniversary of St. Pope John Paul II.