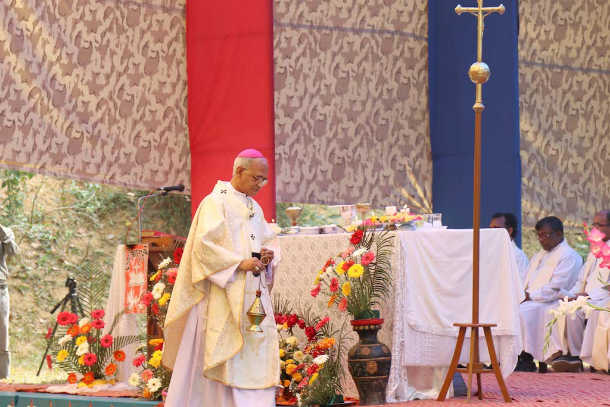 Archbishop Moses M. Costa of Chittagong delivers a Mass during the annual Marian pilgrimage at Our Lady of Lourdes shrine in Diang in eastern Bangladesh in 2018. The Church will host a jubilee marking 500 years of Christianity in the country on Feb. 7-8 in the same city. (Photo by Stephan Uttom/ucanews.com)

For centuries the port of Chittagong, washed by the waters of the Karnaphuli River, has fascinated and attracted travellers, traders, kings, warriors, and preachers of various religions.

In 1517, the river brought Portuguese Catholic merchants to the port. The first group left after their business was done, but a second group that arrived in 1518 decided to stay in Chittagong and nearby Diang, setting up the first Christian settlements in erstwhile East Bengal (now Bangladesh).

"The Portuguese came mainly for business, but they also brought with them the faith in Christ. They developed the first community of Christians," Holy Cross Archbishop Moses M. Costa of Chittagong told ucanews.com.

Portuguese Jesuit priest Father Francesco Fernandez was the first Catholic missionary to set foot in Chittagong in 1598. Two Jesuit priests — Father Melchior de Fonseca and Father Andre Boves — and two Dominican priests followed his footsteps in 1599, and a band of Augustinian missionary priests turned up in the 1600s.

The Augustinians spearheaded the massive conversion of locals, mostly lower-caste Hindus from fishing community and port laborers, as well as slaves from various Indian states brought to Chittagong by merchant ships in 1622-1635.

By the middle of the 17th century, Catholics in Chittagong and neighboring areas stood at around 29,000.

Father Fonseca and Father Boves set up two churches in Diang and Chittagong in 1600, marking the first foothold of the Church in this part of the world.

The Church faced political and social threats amid a tug-of-war between the Mughal Empire that ruled what is now India and the Arakan Kingdom, now part of Myanmar's Rakhine State.

In 1600, the Arakanese king ordered a military invasion of Chittagong and Diang, presumably in retaliation for the Portuguese navy's support for the Mughal emperor during the war between the Mughals and the Arakanese. Portuguese support played a crucial role in defeating the Arakan army.

Some historians have attributed the invasion to the longstanding rivalry between the Portuguese and the Arakanese as they fought for control of Sandwip Island in the Bay of Bengal.

In 1602, the Arakanese army carried out another attack that saw most of the churches in Chittagong and Diang torched.

During the raids, Arakanese soldiers detained Father Fernandez for his support of Portuguese families. They assaulted, blinded, and incarcerated the priest, who died in captivity on Nov. 14, 1602, becoming the first martyr of Bengal.

Soldiers massacred 600 Christian men, women and children and set their bodies alight on the grounds of where now stands the Our Lady of Lourdes Marian Shrine and the Miriam Ashram Church of Diang.

In 1625, Arakanese soldiers beheaded 14 Portuguese Christians in Chittagong for refusing to denounce their faith.

"The Church is indebted to those early missionaries and martyrs, who kept their faith despite all the persecution and challenges they faced. Their toil and blood laid and strengthened the foundation of the Church," Archbishop Costa said.

From strength to strength

In 1845, the Vatican erected the East Bengal Apostolic Vicariate comprising the whole territory of present-day Bangladesh and parts of neighboring India and Myanmar.

The Vatican also appointed Bishop Thomas Oliff as the first Apostolic Vicar. He was based in Chittagong at the beginning but was later sent to Dhaka.

From 1866-1926, the territory of Chittagong was entrusted to Dhaka Diocese. Chittagong Diocese was created in 1927.

In 2015, the Vatican created Barishal Diocese after carving out southern territories from Chittagong.

Chittagong was elevated to an archdiocese on Feb. 2, 2017, with Moses M. Costa as its first archbishop.

From its humble beginnings five centuries ago, the Catholic Church has grown steadily in the country thanks to the tireless service of foreign and local missionaries.

Christians, mostly Catholics, account for less than half a percent of this Muslim-majority country's population of 160 million, or just 600,000 people.

Catholics are spread over eight dioceses and archdioceses. Apart from the majority Bengalis, half hail from different indigenous communities.

Despite being a tiny minority, Christians are highly regarded by Muslims, Hindus and Buddhists for their contributions in the fields of education, healthcare and other services for the underprivileged and helpless.

"Christians have had a positive impact on this land. They have been involved in the socio-economic, cultural and political spheres, and earned praise from everyone for their services rendered," Nirmol Rozario, president of the Bangladesh Christian Association, told ucanews.com.

The Church in Bangladesh runs one university, 10 colleges and more than 500 primary and high schools, offering education to about 100,000 pupils a year, most of them Muslims.

The Catholic and Protestant Churches operate about 16 hospitals and more than 100 medical clinics in rural and urban areas, catering to the medical needs of people across various faiths and ethnicities.

Meanwhile, the Catholic charity Caritas Bangladesh is one of the largest non-governmental organizations in the country. It operates through eight regional offices as it carries out integrated community development, disaster management, and human resources development.

English Baptist missionary William Carey translated and printed the Bible in Bengali, in addition to many other books he helped translate including a Bengali dictionary.

He also developed Bengali typefaces for printing and pioneered the first local printing press, which he used to publish newspapers and periodicals.

Christian missionaries also developed and promoted a colloquial and simplified form of the language from its highly sophisticated form.

Today, the Church's sphere of influence in Chittagong covers three areas: Chittagong city, Chittagong Hill Tracts (CHT), and other mission territories. The area is home to an estimated 30,000 Catholics.

CHT, Bangladesh's only mountainous region bordering India and Myanmar, is home to some 17,000 indigenous Catholics. From the outset, the Church in Chittagong has been multi-ethnic and multicultural.

Catholics here are divided into three major groups — descendants of Portuguese and Anglo-Indians; Bengali migrants from Barishal, Noakhali and other parts of the country; and local and migrant indigenous peoples.

"Since its inception, the Catholic Church in Chittagong has focused on the strong participation of laypeople in its pastoral life," Manik Willver D'Costa, the pastoral coordinator of Chittagong Archdiocese, told ucanews.com.

"It also pioneered dialogue between the different faiths and ethnicities. Its elevation to an archdiocese opened up new opportunities for the faithful so they could join the new church," he added.

He noted how parts of Bangladesh remain "virgin land" for those bent on evangelization.

"On the hills over there, evangelization only took place about 60 years ago. Other areas are still untouched so there are many untapped opportunities for clerics and missionaries to carry out pastoral activities," D'Costa added.

The Catholic Church in Chittagong dedicated 2017 as the "Year of Mission" to pave the way for the jubilee celebrations of 2018 to mark half a millennium of Christianity in Bangladesh.

It instructed Catholics to focus on "reflection, discussion, and "catechism" so they could "renew their faith" on this momentous occasion.

The archdiocese outlined and carried out activities based on six pastoral priorities for this special year — catechism and confirmation of faith, education and culture, organization development, economic sustainability, health services, and evangelization.

The final celebrations will be held in Diang, and also in Chittagong to honor the sacrifices made by those early missionaries and martyrs, on Feb. 7-8. Thousands of Catholics, clergy and religious folk from various parts of the country, as well as neighboring India and Myanmar, are expected to participate.

The celebrations will include special prayers, a Marian pilgrimage, holy Mass, interfaith gatherings and cultural programs.

Cardinal Fernando Filoni, prefect of the Vatican's Congregation for the Evangelizations of Peoples, is due to attend some of the festivities.