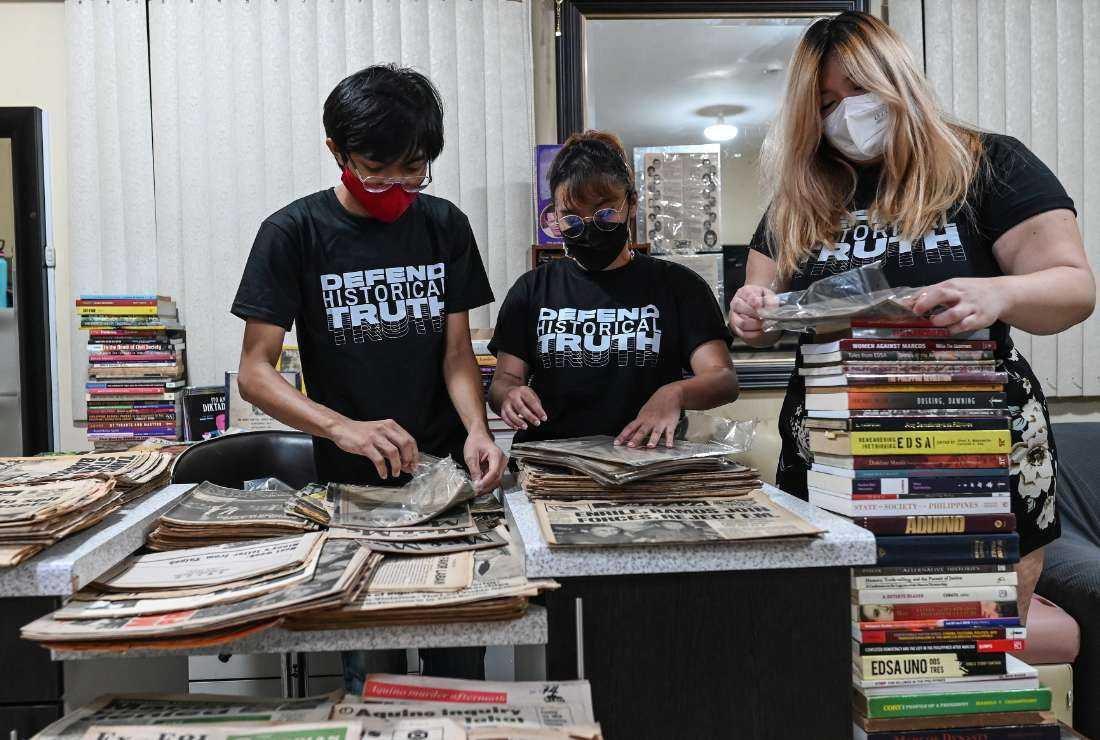 American lawyer Thomas Jones still remembers the scars of Philippine torture victims he interviewed for Amnesty International inside the country's detention centers in 1975 during the rule of late dictator Ferdinand Marcos.

But Marcos, who presided over widespread abuses and corruption during his 20 years in power, denied the lawyer's visit to the Philippines ever happened.

Decades later the dictator's claim -- debunked by AFP and others -- has resurfaced on social media sites popular among Filipinos.

Amnesty estimates thousands of people were killed and tens of thousands tortured and imprisoned after Marcos imposed martial law on September 21, 1972.

Under legislation signed in 2013 by former president Benigno Aquino, 11,103 victims of torture, killings, enforced disappearances and other abuses have been officially recognized and compensated.

In the run-up to Wednesday's 50th anniversary of the start of martial law, pro-Marcos posts have flooded Facebook and TikTok with false and misleading claims that cast doubt on Amnesty's findings and downplay the abuses.

AFP has fact-checked multiple posts that carried footage of Marcos addressing US media in 1982.

Marcos -- father of current Philippine President Ferdinand Marcos Jr who has defended martial law -- accused Amnesty of relying on "hearsay" for their findings. And he falsely claimed the rights group "never" visited the country.

The clip resurfaced on TikTok in March after an anti-Marcos Senate candidate running in May 9 elections cited Amnesty for figures showing the horrors of martial law.

Within hours of that live-streamed event, the Marcos footage had been stitched with the Espiritu video and circulated on TikTok and Facebook.

It received more than 900,000 views, according to an analysis by AFP's Fact Check team.

One post drew more than 3,000 comments that questioned Amnesty's numbers and described the dictator as "a great leader destroyed by black propaganda".

Jones said Marcos lied about the Amnesty visit and martial law abuses, and decades later Filipinos were being deceived by his son.

"People of the Philippines, they still don't know the facts," the 81-year-old told AFP from his home in Wisconsin.

Jones and a colleague interviewed Marcos, members of his cabinet and 107 detainees during their visit.

Marcos admitted about 50,000 people had been arrested in the first few years of martial law, while 71 detainees told them they had been tortured, Jones said.

Amnesty published their findings in 1976, with their conclusion that "torture was used freely and with extreme cruelty, often over long periods".

The Marcos government denied torture was "widely used" and said Amnesty's report was "based on fabrications, biased, and without factual foundations".

Josefina Forcadilla, 66, one of the detainees mentioned in the Amnesty report, remembers being interviewed by Jones and his colleague while she was imprisoned.

"I was hesitant to talk to them at first, until they said they wanted to document what my family went through at the time," she told AFP.

Forcadilla was 17 when police raided their house in search of her elder brother in April 1973.

She said an officer boxed her ears, fondled her breasts and played Russian roulette with a gun while interrogating her about his whereabouts.

"I was in shock. I couldn't cry. I knew then that their purpose was really to kill," she said.

She and three other siblings were eventually arrested.

Her elder sister was assaulted and died in detention, while her brother was tortured and another sister gave birth in prison.

"My family can't help but ask, why do Filipinos have short memories?" she said.

Amnesty visited the Philippines again in 1981 to document abuses that took place from 1976 onwards.

Marcos was toppled from power in 1986.

Rachel Chhoa-Howard, Amnesty researcher for Southeast Asia, defended the rights group's estimates, saying they were "based on our own field missions and documentation during the 80s and cross-referenced with other research at the time".

But she said the true scale of the abuses may never be known "given the immensity and pervasiveness of violations during that time".

Denying atrocities
Yet, the truth about what is known is itself under attack.

Filipinos worried about martial law violence being whitewashed or erased by the new Marcos administration have been digitizing books, films and articles documenting the brutality.

One group is Project Gunita, which has been scanning and posting old newspaper and magazine reports on social media to educate users influenced by pro-Marcos misinformation.

Joel Ariate, a member of the University of the Philippines' Marcos Regime Research group, said denying Marcos atrocities "has become like a bloodsport online".

He said the key to fighting misinformation about martial law was to repeat the truth "as much as the lies".

Marcos Jr, who said earlier this year he had not seen Amnesty's figures and did not know how they were generated, last week acknowledged there had been "abuses" under martial law, "like in any war".

But martial law had been "necessary" to defend the country against communist and Muslim insurgencies, he told a local celebrity talk show host.

Carmelo Crisanto of the Human Rights Violations Victims' Memorial Commission, an independent government body, said in August the real number of victims could be much higher than the official figure.

"Many people in the fringes of our society -- Muslims, farmers, fisherfolk -- they didn't even hear that there was a process for filing claims," Crisanto said.

"So the effects of the regime could have touched them but they are not recorded."