A year into Taliban rule, poverty has been driven to desperate new levels, exacerbated by drought and inflation 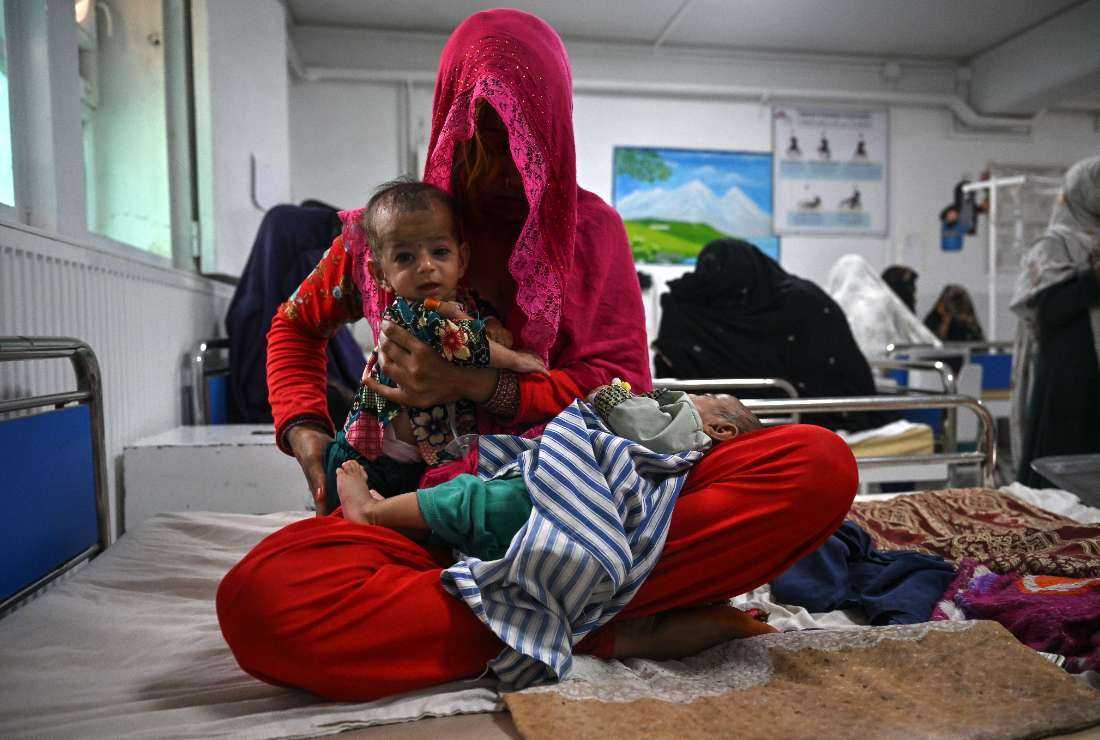 Breshna sits on a hospital bed with her four-month-old twins Subhania and Subhan in the malnutrition ward at the Boost Hospital, run by Medicines Sans Frontiers (MSF), in Lashkar Gah, Helmand, on July 21. (Photo: AFP)

The heaving wards of a ramshackle clinic in southern Afghanistan are just one sign of the catastrophic humanitarian crisis that has gripped the war-ravaged country since the Taliban returned to power a year ago.

Last month, the Musa Qala District Hospital in Helmand province was forced to shut its doors to all except those suffering from suspected cholera.

The infirmary was soon jammed with listless patients, intravenous drips needled into their wrists as they recuperated on rusting gurneys.

Though the clinic lacks facilities to test for cholera, about 550 patients presented themselves within days, showing symptoms of a disease caused by a lack of basic sanitation needs: clean drinking water and an adequate sewerage system.

"We didn't see this from last year, or another year."

Poverty in the country -- felt most keenly in Afghanistan's south -- has been driven to desperate new levels, exacerbated by drought and inflation since Russia's invasion of Ukraine.

"Since the Emirate (Taliban) came into power, we can't even find cooking oil," said one woman, perched on a hospital cot next to her malnourished six-month-old grandson in Lashkar Gah, Helmand's provincial capital.

"Poor people are squashed under their feet," the 35-year-old said.

Her grandchild is being treated for the fifth time at Boost Hospital, a sun-baked maze of paint-peeled buildings run jointly by the health ministry and Doctors Without Borders (MSF).

Many of the beds on the malnutrition ward host two tiny, frail patients -- some suckling gamely on syringes of milk, while others heave onerous breaths as they fight to regain their strength.

"We can't even find dry bread," said Breshna, the mother of another patient, who guesses her age at between 15 and 20.

"We haven't had anything to eat in three or four days."

Assistant nursing supervisor Homeira Nowrozi, fighting to be heard above wailing infants, said staff "have not any rest".

"We have a lot of patients that come in critical," she said, because parents could not afford to travel sooner.

"We don't know how many mortalities ... we have in the districts, because they didn't come to hospital."

Afghanistan's plight began well before August 15, 2021 when the Taliban captured Kabul on the heels of a hasty withdrawal of US-led troops and the collapse of the government they propped up.

But the Taliban's takeover pushed the country -- home to 38 million people -- over the precipice.

Over the past year, would-be donors have grappled with the conundrum of funnelling fresh funding to the ailing nation, which the Taliban rebranded the "Islamic Emirate" in line with their austere theocratic beliefs.

"How do you provide assistance in a country where you don't recognise the government?" asked Roxanna Shapour of the Afghanistan Analysts Network.

Importing humanitarian aid to address crises such as the June earthquake -- which killed more than 1,000 people and left tens of thousands more homeless -- is relatively simple, she said, as it is "non-political, it's life-saving assistance".

Cash is also airlifted to fund food aid and healthcare, but development aid for long-term projects that could transform the economy is more complex.

In Musa Qala -- a dusty farming outpost with a shipping container bazaar staffed by child shopkeepers -- the deprivation is visible.

The town witnessed some of the bloodiest chapters of the 2001-2021 war, and is connected to Lashkar Gah by a makeshift track up a desiccated riverbed lined with jagged rocks.

The road begins again further south at Sangin, a place where mud-walled compounds have been so badly ravaged by gunfire and artillery that they are crumbling back into the earth.

In a cruel irony, desperation and the demand for humanitarian services have only deepened with the arrival of peace.

"Now we can visit the hospital whether it's night or day," said Maimana, whose eight-year-old daughter Asia was being treated at Musa Qala.

"Before, there used to be fighting and mines -- the roads were blocked."

Helmand public health director Sayed Ahmad told AFP that the flood of new patients means there is "less space" and that "there are fewer staff, so there are difficulties".

Nevertheless, Ahmad -- a soft-spoken doctor whose office is lined with medical tomes -- insists "the overall situation is better" than under the previous government, when corruption was rife.

He blames economic sanctions against the Taliban for some of their woes, saying "the needs and demands of people have increased".

But analysts say the Islamists are far from blameless.

"The Taliban's repressive social policies have made it more difficult to reach a deal on getting those frozen assets unlocked," said International Crisis Group's Graeme Smith.

"This is really just about the emotions of policymakers -- and shutting millions of girls out of secondary schools really soured the mood."

But after coveting control for two decades, they are ruling the nation at its most ruined.

One man in Lashkar Gah -- who asked not to be named -- offered his own scathing remark on the Taliban's ability to rule.

"The clothes of the government are too big for them," he said.