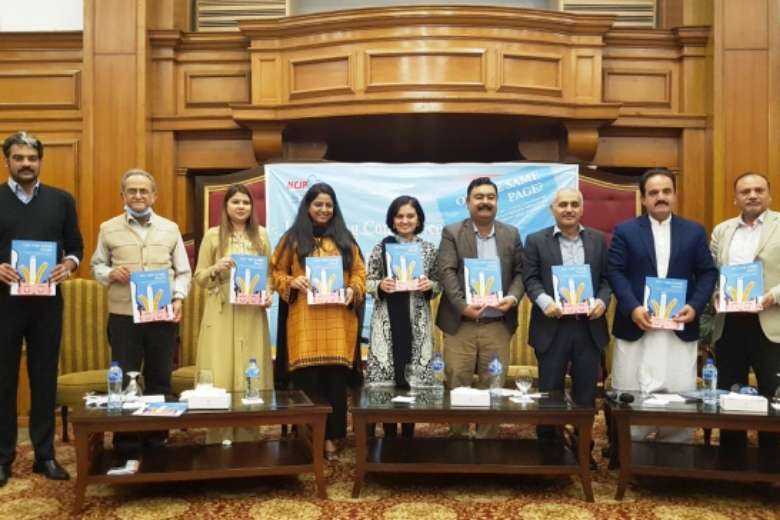 A report on the impact of religious content in curricula and textbooks in Pakistan by the National Commission for Justice and Peace is released in Lahore on Nov. 26. (Photo: Kamran Chaudhry/UCA News)

Lack of interest in studies, an increased sense of inferiority and exclusion, discrimination in educational and professional lives, diminishing interaction with Muslims and fear of hate are common concerns shared by minority Christian, Hindu and Sikh students in Pakistan.

When a Catholic human rights body conducted a survey of about 400 students, parents and educators across 12 cities last year, all of them chose to speak on condition of anonymity.

“When one of my classmates, a Muslim girl, learned that I was Christian, she said ‘Your complexion is fair. You look like one of us and not at all like a Christian. You are my best friend. You should convert to Islam,’” recalled a female student from Faisalabad in Punjab province.

“My parents keep reminding me to be vigilant while engaging in discussions with followers of the majority religion on any sensitive or religious topic. I understand that they fear for our safety,” said a college student from Khyber Pakhtunkhwa province in the north.

Similar comments keep appearing in a study titled “On the Same Page? Perceptions on religious content in curricula and textbooks: impact on harmony and tolerance” published by the National Commission for Justice and Peace (NCJP) in Lahore on Nov. 26.

The NCJP has been monitoring Pakistan's education policy, curriculum and textbooks, sharing its analysis since 2012. The commission joins educationists in pointing out that Islamic content at the expense of learning is equally harmful to both majority and minority faiths.

“A few students spoke of instances where the curriculum itself contained made-up things about their religion and the teacher appeared to reinforce it. At other times, when a Muslim student posed an insensitive comment or question about a minority religion, some teachers sided with or encouraged such students,” claimed the study.

On several occasions, students claimed their class fellows were transferred to another section after teachers discovered their religious identity.

“Persuasion by fellow students to change religion adds to the distress of the family of a female student. Early marriages are common because the family is afraid that their daughter might marry someone from another religion,” the study stated while narrating the psychological and social impact of religious content in the curriculum.

The study further noted that the threat of involuntary conversions and forced marriages of young girls from religious minorities, especially Hindu girls in Sindh province, adds to the anxiety.

All  21 Sikh respondents said their religion was inadequately represented in the public curriculum. As many as 78.5 percent of Hindu respondents believed that religious references had a negative impact on them. A clear majority believed its effects to be long-lasting.

Most of the Sikhs believed that families of students are also affected. The highest ratio of very worried respondents was noted in Balochistan province. All of them rejected a positive outlook. Eighty four percent questioned their standing/place in society.

Christians had the highest ratio of reporting a lack of support to the dangerous impacts of the curriculum.

Church officials in Pakistan often complain about hate material in the curriculum and an overemphasis on Islam in the education system, often with a bias against non-Muslims. Article 22 (1) of the constitution prohibits the teaching of religion to students other than their own.

Saqib Nisar, a former chief justice of Pakistan, created a one-man commission with Dr. Shoaib Suddle as its member in 2019 to push the federal and provincial ministries and departments to implement the Supreme Court’s 2014 landmark judgment on religious minorities.

A key recommendation was to reform the curriculum.

Prime Minister Imran Khan introduced a uniform education system — the Single National Curriculum (SNC) — which was criticized for the overtly Islamic content in compulsory subjects. Educationists fear that Khan’s inclination toward madrasas (schools for Islamic instruction) might lead to the loss of students’ ability to think and reason independently from the dictates of Islamic thought.

The Federal Ministry for Education and Professional Training has already completed the first phase of the SNC for grades one to five. The National Curriculum Council is now seeking recommendations from civil society to revise the Education Policy Framework 2018 while preparing the second phase of SNC for grades six to eight, to be launched next year.

“The important findings derived from the research provide an insight that can meaningfully inform the government and the relevant stakeholders in SNC development on human rights concerns,” said Naeem Yousaf Gill, NCJP executive director.

The blasphemy law has shrunken the pace and pushed the state towards more exclusiveness and segmentation. Sadly Pakistan is becoming the sick man of Asia

NCJP research is the first to share such findings, observed Riaz Ahmed Sheikh, dean of the faculty of social science and education at the Shaheed Zulfikar Ali Bhutto Institute of Science and Technology at the University of Karachi.

“The anonymous comments published in this study depict fear in religious minorities. Minority ghettos, common in every major city, are vulnerable to attacks,” he said.

“The blasphemy law has shrunken the pace and pushed the state towards more exclusiveness and segmentation. Sadly Pakistan is becoming the sick man of Asia. We tremble when giving tribute to Muhammad Abdus Salam, the first Pakistani Nobel laureate.”

Salam, an Ahmadi, shared the 1979 Nobel Prize for Physics for his contribution to the electroweak unification theory. Many mainstream Muslims regard the Ahmadis as a heretical Islamic sect. The Pakistan government declared them non-Muslims in 1974.

Last year a group of youngsters smeared his portrait outside Gujranwala’s National Science College while raising slogans against the minority Ahmadiyya community.

For the past several years, the US State Department has been designating Pakistan among "countries of particular concern" where “systematic, ongoing and egregious violations of religious freedom" are tolerated.