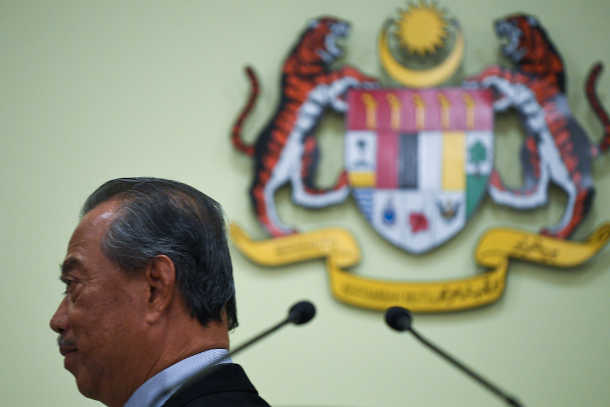 The emergence of the hardline Islamist party PAS as part of conservative Muslim Prime Minister Muhyiddin Yassin’s new coalition government is most unpopular with Malaysia’s minorities.

Catholics account for 3.68 percent or about one million people in a nation where 60 percent of people are Muslim. Catholicism is only pipped by Hinduism (6.3 percent) in terms of numbers of followers but Christianity overall accounts for 9.2 percent.

Malaysia’s biggest ethnic minority are the Chinese, who account for 23 percent of the country's 32 million people, down from about 40 percent in 1957. The other significant minority are Indians, who were brought by the British to help with low-level administration and to teach English. India was very useful for the British in the century after it conquered what is now the world’s second most populous nation.

Malaysia has attempted to rebuild itself since its 1957 independence from Britain — as Indonesia also has —  as a religiously tolerant, multifaith society. That is true enough in Malaysia on paper and to a point in Indonesia, at least in the relative terms of South and Southeast Asia, where the heady cocktail of religion and nationalism is arguably the newest political thematic.

As part of trying to create a decent country in the years after independence, the Malay majority were determined to get the “native sons of the soil” or Bumiputra back in the race, having been left behind by the Chinese, who were mainly Cantonese or Fujian, Hakka and Hokkien; that’s the same sort of mix you will see in the diaspora across Southeast Asia.

The United Malays National Organisation (UMNO) including former PM Mahathir Mohamad created economic apartheid and gerrymandered the parliament grossly in favor of rural areas where voters were easily bought off with necessities like palm oil and rice and driven to polling stations.

In Malaysia, geographically at the more Muslim end of the Malay-Indonesia archipelago, the hardliners have gained a foothold in the federal ruling alliance for the first time since 1974. This has sparked immediate and obvious fears from Christian denominations.

It will also have sparked even deeper fears for the Chinese, who have suffered both personal and institutional racism since the British left. Chinese are on average wealthier than Malays and their names are prominent in the top echelons of wealthy business people. They tend to be better educated and cosmopolitan.

As migrants over millennia, the Chinese and Jews are the great global exemplar. Indeed, the Chinese are sometimes known as “the Jews of Asia” — not a derogatory term unless one wants it to be — because they have traditionally controlled the banks and other major business in Indonesia, the Philippines and Thailand. And, of course, the Chinese invented modern Singapore; one reason was to get away from Malay racists.

After the 2018 election, opposition parties argued that Mahathir’s Pakatan Harapan government was “too Chinese” because it included the Chinese-dominated Democratic Action Party. This has been circulated widely around Facebook and WhatsApp, and even in mainstream media sources.

According to Australian National University senior fellow and Malaysian expert Amrita Malhi, this argument has gained incredible traction. “It helps to some extent to explain Pakatan’s slide in support, especially among Malay Muslim voters, since it was elected. Effectively, UMNO and PAS have managed to reverse the impact of Mahathir’s China-focused election campaign and turn the focus back on to Malaysian Chinese. The resulting slide has been obvious in recent by-elections and caused significant panic inside the government. It was one of the triggers for the power struggle that erupted last week.”

While UMNO’s problem with the Chinese was fundamentally economic, PAS also has religious concerns. The Chinese make up one of the two largest slices of the Malaysian Catholic Church along with people who live on the island of Borneo, where the population is about 30 percent Christian.

There are a several ethnic Chinese bishops in Malaysia as well as many priests. The PAS argument is that Chinese political participation puts them in a “state of war” against Malay Muslims and, by extension, against Islam. There is also an insinuation that Chinese politics is “communist,” which is a reference to the communist movement that was largely Chinese in its membership during much of the 1940s but which was wiped out in the lead-up to independence.

Many members of UMNO and Muhyiddin’s Parti Pribumi Bersatu Malaysia will obviously want to keep PAS on a leash, yet Muhyiddin needs the party’s numbers and it also has the support of UMNO. Of course, many moderate Muslims across Malaysia are deeply suspicious of PAS, so it’s not just minorities that will be worried about whether UMNO can keep PAS in check.